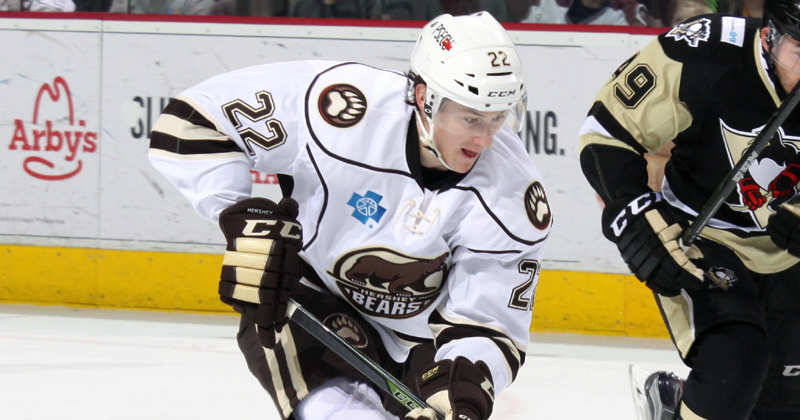 The Hershey Bears announced today that forward Dylan Margonari has been recalled from the club's ECHL affiliate, the South Carolina Stingrays. The move was announced by Hershey’s Vice President of Hockey Operations, Bryan Helmer.

Margonari, 25, has tallied 15 points (eight goals, seven assists) and posted a +10 rating in 23 games with the Stingrays this season. On Tuesday, the Greensburg, Pennsylvania native was named the Sher-Wood Hockey ECHL Player of the Week, after scoring four goals, adding two assists, and posting a +5 rating while leading South Carolina to a 4-0-0 record last week.

The forward has points in four of his last five games. In his rookie season last year, Margonari was limited to just 23 games after suffering a neck injury on Jan. 28 versus Florida. The 6-foot-1, 190-pound forward has made a full recovery, and returned the Stingrays lineup on Oct. 20.

Margonari played two games with Hershey at the end of the 2015-16 season after finishing his senior season at Minnesota State University, Mankato. He made his AHL debut on Apr. 16 vs. Lehigh Valley.

Margonari will wear #28 for Hershey and has joined the team ahead of Friday's practice.

The Bears rematch with the Providence Bruins on Saturday at 7 p.m. at the Giant Center. That evening is Hall of Fame Night. Ticket information is available on HersheyBears.com.