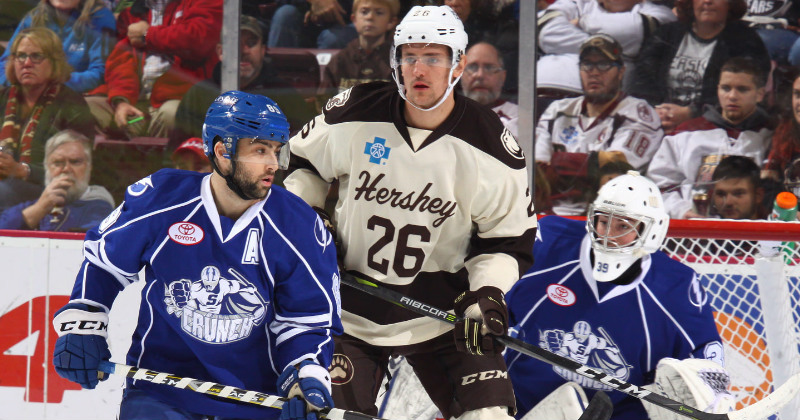 Chris Bourque scored twice, and the Hershey Bears came alive in the third period to defeat the Syracuse Crunch, 4-2, on Wednesday night at Giant Center. The Bears trailed 1-0 through 40 minutes, but erupted with their most productive period of the season to earn their fourth victory over the past five games.

Entering the third period, Syracuse had scored the lone goal of the game as Anthony Cirelli struck on the power play at 43 seconds of the second period. After being frustrated with no goals on 21 shots through the first two periods, Hershey tallied early in the game’s final frame. Jeremy Langlois scored his second goal of the season just 27 seconds into the third period. The forward took a slap shot from the right wing that went off the backside of Syracuse defender Jamie McBain and rolled past Crunch goaltender Connor Ingram to make it 1-1. Liam O’Brien and Colby Williams assisted.

Bourque would score his first of two goals at 4:05, finishing a beautiful passing play from Wayne Simpson for his sixth goal of the season. Simpson rushed down the right wing, and fed a pass through the slot. He found Bourque on the left wing, and the veteran lifted a shot over an outstretched Ingram to make it 2-1 Hershey.

The Crunch answered back as Alexander Volkov popped a shot over Hershey netminder Pheonix Copley off a quick pass from the behind the net. Dennis Yan found Volkov open out front to tie the score, 2-2, at 6:57.

However, Hershey finished strong, an impressive display of hand-eye coordination from Bourque won Hershey the game. Simpson and Travis Boyd worked the puck behind the Syracuse goal, and Simpson flipped the puck to Bourque in the slot. The alternate captain batted the puck out of mid-air, beating Ingram for his seventh goal of the season, and earning the eventual game-winner.

Hershey sealed the win with an empty net goal from Lucas Johansen with just 8.2 seconds to play. The Bears outshot Syracuse 26-22. Copley stopped 20 shots for Hershey, earning his fourth straight win. The Bears went 0-for-7 on the power play, while Syracuse was 1-for-4.

Hershey's win improved their record to the .500 mark for the second time in as many weeks, now standing at 7-7-0-2. The Syracuse Crunch fall to 4-7-1-2 on the season and lost for time this season when leading after 40 minutes.

The Bears return to action on Friday night in Providence versus the Bruins at the Dunkin’ Donuts Center in Rhode Island. The puck drops at 7:05 p.m. and Zack Fisch has the call on the Bears Radio Network.