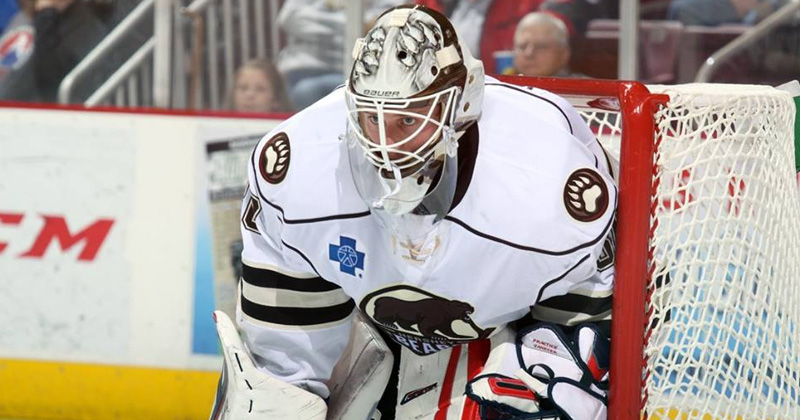 Vanecek Re-Assigned to Stingrays For Rehab

The Hershey Bears announced today that goaltender Vitek Vanecek has been re-assigned to the club's ECHL affiliate, the South Carolina Stingrays. Vanecek, who has been out with a lower-body injury since mid-September, is expected to make a rehab start tonight for the Stingrays in Greenville, South Carolina.

Vanecek, 21, went 18-10-7 last season for the Chocolate and White, and finished third among rookie goaltenders in the AHL with a 2.54 goals against average. He posted five shutouts, a mark tied for the second most in the AHL. The native of Havlickuv Brod, Czech Republic was named the CCM/AHL Player of the Week for the period ending on Dec. 18, 2016.

Vanecek started his professional career with the Stingrays in 2015-16. In his first campaign in North American, he went 18-7-6 in 32 games with South Carolina and finished with the second best goals-against average in the ECHL at 2.03, and the fourth best save percentage among rookie goaltenders at .917. He earned league honors four times during the 2015-16 campaign, including being named to the ECHL All-Rookie Team.

Vanecek was a second round selection, 39th overall, of the Capitals in the 2014 NHL Draft. He will rejoin the Bears in the coming days.

Hershey battles the Rochester Americans on the road this evening. The puck drops at 7:05 p.m. from the Blue Cross Arena, and the Voice of the Bears, Zack Fisch, will have the call on the Bears Radio Network.