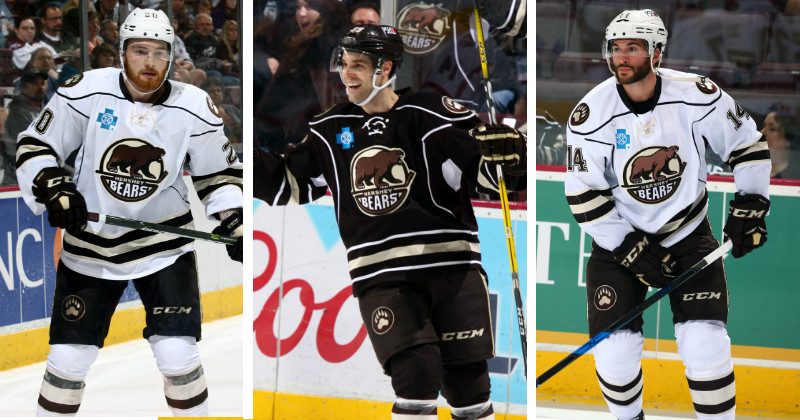 O'Brien, 23, has scored two goals in nine games this season with the Bears. The forward scored in back-to-back contests last weekend, and has also posted four penalty minutes this season with the Chocolate and White. In 2016-17, O'Brien enjoyed a breakout season, posting career-highs in games played (64), goals (10), assists (20), and points (30).

The native of Halifax, Nova Scotia has collected 56 points (23 goals, 33 assists) and 362 penalty minutes in 177 career games with Hershey. With Washington, O'Brien has skated in 14 career games, scoring two points (one goal, one assist) and adding 23 penalty minutes.

Peluso, 28, returns to Hershey after playing in two games with the Capitals last weekend. He has appeared in three games with Hershey this season. The 6-foot-4, 225-pound winger was signed as a free agent by the Capitals on Jul. 2 after skating in 22 games with the AHL's Manitoba Moose last season.

Zajac, 29, has three points (one goal, two assists) in four games with the Stingrays this season. He played nine games with Hershey in 2016-17, scoring seven points (four goals, three assists) and posting a +8 rating. Last year with South Carolina, Zajac finished second on the team in scoring, tallying a career-best 52 points, including a team-high 39 assists. He also finished third on the team in playoff scoring, registering 17 points (six goals, 11 assists) in 22 games as South Carolina advanced to the Kelly Cup Finals. The 5-foot-11, 180-pound forward has played 131 AHL games with Albany, Manitoba, and Hershey, posting 69 points (21 goals, 48 assists). His best season came with Albany in 2013-14 when he registered 44 points (12 goals, 32 assists) in 67 games.

Hershey hits the road to battle the Rochester Americans this Friday, Nov. 3. The puck drops at 7:05 p.m. from the Blue Cross Arena, and the Voice of the Bears, Zack Fisch, will have the call on the Bears Radio Network.