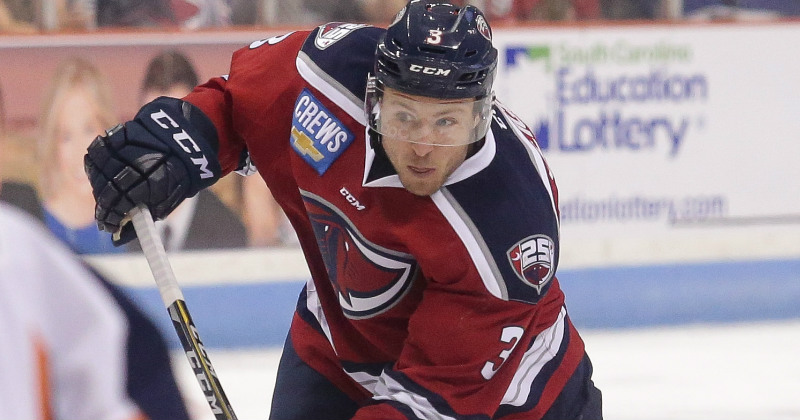 The Hershey Bears have announced three roster moves today. The Bears have recalled defenseman Paul Geiger from the club’s ECHL affiliate, the South Carolina Stingrays. Additionally, defenseman Kris Bindulis and goaltender Parker Milner have been re-assigned to the Stingrays. The moves were announced by Hershey’s Vice President of Hockey Operations, Bryan Helmer.

Geiger, 25, had one goal in four contests with the Stingrays this season. The 6-foot-3, 214-pound defender skated in 49 games with the AHL’s Rochester Americans last season, compiling nine points (three goals, six assists), and 35 penalty minutes. Geiger also appeared in two games with the Elmira Jackals of the ECHL, notching one goal.

The native of Stouffville, Ontario has skated in 58 AHL games with Albany and Rochester, scoring 11 points (four goals, seven assists). Prior to turning professional, Geiger played four seasons of NCAA hockey at Clarkson University. He was an ECAC All-Rookie Team member in 2012-13, and was named an ECAC Hockey Third-Team All-Star in 2015-16. He served as team captain his junior and senior seasons and posted 51 points (13 goals, 38 assists) in 150 career NCAA games. Geiger was a four-time member of the ECAC All-Academic Team.

Bindulis, 22, appeared in one game for Hershey, making his AHL debut on Oct. 22 at Rockford. He was signed out of Lake Superior State by the Washington Capitals on Mar. 7.

Hershey hits the road to battle the Rochester Americans this Friday, Nov. 3. The puck drops at 7:05 p.m. from the Blue Cross Arena, and the Voice of the Bears, Zack Fisch, will have the call on the Bears Radio Network.