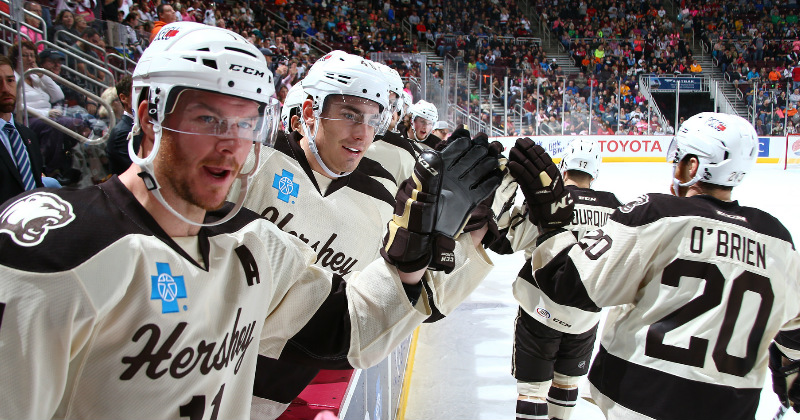 Hershey jumped out of the starting game, putting pucks on Hartford goaltender Chris Nell from the get-go. Only 3:34 into the contest, the Bears hit twine courtesy of Wayne Simpson's second goal of the season. Following a Chris Bourque tripping penalty, Bourque came out of the penalty box, and broke up a Hartford passing sequence and his defensive zone and fed an outlet pass to Travis Boyd. On a 2-on-1 rush, Boyd backhanded a pass across to Simpson for the conversion.

The Wolf Pack drew even on an unassisted goal at the 6:08 mark. From an angle, Steven Fogarty beat Hershey goaltender Adam Carlson high, short-side to tie the game at 1-1.

Hershey would response with 8:35 left in the first frame. Bourque scored for the Bears on the power play to give Hershey a 2-1 lead. From the center-point, Bourque fired a slap shot through a crowd of bodies in front of the net. Hershey’s Liam O’Brien screened Nell, and the puck eluded the goaltender for Bourque’s third goal of the season.

In the later stages of the second period, Johansen added an insurance marker with his first American Hockey League goal. From the left wing, Johansen snapped a shot past Nell's catching glove for his club's second power play goal of the night at 15:23. Colby Williams and Simpson assisted on the goal.

In the third period, Fogarty added his second goal for Hartford to cut Hershey’s lead to 3-2. From the left wing, the Chambersburg native took a shot through a Hershey defender’s legs and past Carlson short-side at 4:34.

Once again, Hershey had an answer to Hartford’s goal. O’Brien scored for Hershey for the second straight night, finishing a perfect passing play from Dustin Gazley to regain the two-goal lead for Hershey at 11:35. Gazley rushed down the right wing towards the Hartford net and slid a backhand pass across to O’Brien. The forward tapped the puck into the open net to make it 4-2.

With the netminder pulled and while on the power play, Hartford’s Ryan Graves would score late for the Wolf Pack, beating Carlson through a screen with under 17 seconds to play to make it 4-3.

Carlson earned his second win of the season, stopping 33 shots in the victory. Hartford outshot Hershey 36-28, but only went 1-for-6 on the power play. The Bears were 2-for-8

Hershey is now 3-5-0-1 on the season while Hartford falls to 4-5-0-1. Sunday’s game was Hershey’s annual Mixed-Up Productions Pink The Rink, helping support the fight against breast cancer.

The Bears are back in action on Friday, Nov. 3 at Rochester. The puck drops at 7:05 p.m. and Zack Fisch has the call on the Bears Radio Network.