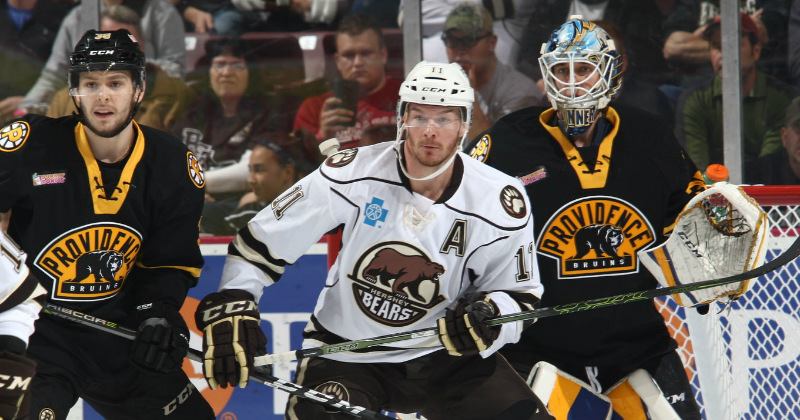 In the opening stanza, each club saw multiple opportunities on the power play, with both teams hitting pay-dirt. The Bruins opened the scoring at 6:20 on their first power play opportunity following a Tyler Lewington interference infraction. Colton Hargrove was left open at the net front and tucked his own rebound past Hershey goaltender Parker Milner.

The Bruins' lead lasted all but 100 seconds, until Hershey capitalized on their first crack on the man-advantage. On a pretty passing play, Boyd won a puck battle in the right corner and fed an open Bourque at the point. Bourque showed patience and waited for a mobile Liam O'Brien to sneak to the front of the net. A slap-pass from Bourque was deflected by O'Brien at the top of the crease, and the redirect beat Providence goaltender Jordan Binnington to knot the contest at 1-1.

Into the middle period, the Chocolate and White capitalized once more via the power play at 13:43. On a Riley Barber shot towards the cage, the puck had eyes and popped into the blue paint. Travis Boyd was in the right place at the right time and chipped the puck inches past the goal line. Following a video review, the call on the ice of a goal was confirmed, making it 2-1 Hershey on Boyd's first goal of the year.

In the third period, after Hershey had killed a 5-on-3 power play for the Bruins, Providence used an even strength marker to equalize. Hargrove scored his second goal of the game at 7:21 to tie the contest for Providence, 2-2. The forward dug the puck out of a pile and beat Milner with a wrist shot past the blocker to even the score.

On the power play, Hershey responded. After going 0-for-7 on the man-advantage the night before, Hershey’s power play posted a 3-for-6 evening. At 13:29, Hobbs connected for the Chocolate and White to give Hershey the lead back. Bourque snapped a pass back to the slot, and Hobbs beat Binnington cleanly with a slap shot to the top corner to make it 3-2 Hershey.

The Bruins were held to just 1-for-7 on the power play, and Hershey outshot Providence 28-20 in the win. In goal, Milner earned his first victory of the season with 18 saves. The Bears improved to 2-5-0-1 with the win, while Providence fell to 6-2-0-0.

Hershey returns to action tomorrow night versus Hartford for a 5 p.m. puck drop with the Wolf Pack. The contest is Mixed Up Productions Pink The Rink Night and a Hersheypark pass night. A capacity crowd is expected and ticket information is available at HersheyBears.com.