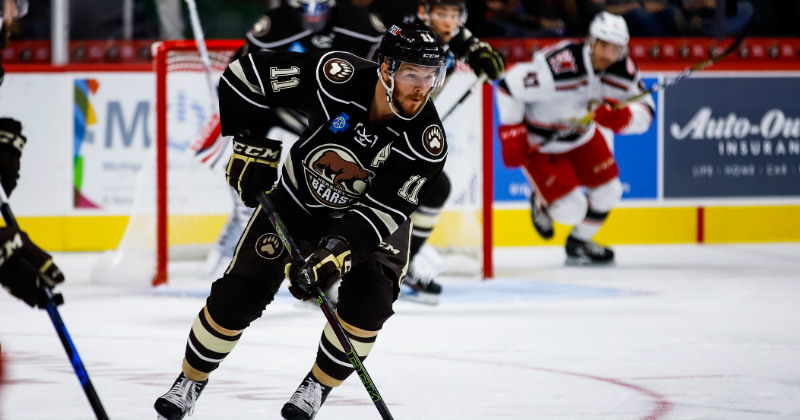 Four points from Chandler Stephenson, including his first career hat-trick, propelled the Hershey Bears to 4-2 victory over the Grand Rapids Griffins at the Van Andel Arena on Saturday night. In his AHL debut, netminder Adam Carlson stopped 24 shots as Hershey won its first meeting versus Grand Rapids since 2006.

Similar to the previous night in Milwaukee, the opposition drew first blood. Colin Campbell banked in a rebound following a shot from Dylan Mcllrath to make it 1-0 Griffins at 6:17 of the opening frame.

Carlson stopped 19 of 20 shots in the first 40 minutes to keep the Bears within striking distance. With three minutes remaining in the middle stanza, Colby Williams was penalized for a double-minor high-sticking infraction. Only 18 seconds later, the Chocolate and White drew even.

On an outstanding individual effort, Stephenson raced down the left wing and snapped a shot past Grand Rapids goaltender Jared Coreau for the Bears' first shorthanded goal of the season. Riley Barber and Hubert Labrie received the helpers on Stephenson's third goal of the campaign.

When it appeared the game was slated for a low scoring affair, the flood gates opened between both clubs in the third period. Hershey grabbed their first lead of the night 4:10 into the period. On an odd-man rush, Chris Bourque centered a crisp feed across the ice for a trailing Garrett Mitchell. The captain struck for his first goal of the season to make it 2-1 Hershey.

Stephenson added an insurance marker, which later proved to be the game-winning goal only 2:06 later. On the power play, the forward cut to the net on an angle and banked a shot off a defender and past Coreau to make it a 3-1 contest.

Grand Rapids would inch closer and respond less than a minute later. On a collision, Matthew Ford crashed into the net and slid the puck into the cage as it was being dislodged from its pegs. Following video review, it was deemed the puck had crossed the goal line before the net was knocked off. Ford was credited with his first goal of the season to make it 3-2 at 7:02.

With just 3:42 left, Stephenson completed the hat-trick and restored Hershey's two-goal lead. After a neutral zone poke at a loose puck, Stephenson walked in on a breakaway and buried a shot low to the ice past Coreau.

The Bears complete their Midwest road trip with a 5 p.m. Eastern tilt tomorrow evening in Rockford for the franchise's first game versus the IceHogs. Pregame coverage is slated for 4:30 p.m. on the Bears Radio Network with Voice of the Bears, Zack Fisch, having the call.