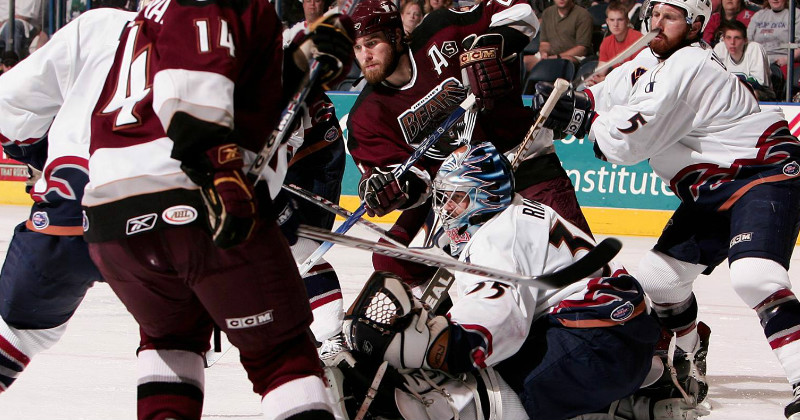 BEARS AT ADMIRALS: The Hershey Bears open a Midwest road trip this evening versus the undefeated Milwaukee Admirals. Hershey heads to the Midwest for its first three-in-three of the season and battles the Admirals for the first time since the 2006 Calder Cup Finals. The Bears are still seeking their first victory of the 80th Anniversary Season after dropping a 5-2 contest to Belleville last Saturday, and falling 4-3 to Lehigh Valley in a shootout Sunday. Tonight is Milwaukee’s home opener after the club earned two road wins at Iowa, and one at Rockford.

BACK TO BREW TOWN: Tonight is Hershey’s first visit to Milwaukee since the 2006 Calder Cup Finals. The Bears beat the Admirals, four games to two, to win their 9th Calder Cup. The Bears earned three straight victories to sink the Admirals, including 7-2 and 6-4 wins at Giant Center in Games 4 and 5. The cup clinching Game 6 was held in Milwaukee on Jun. 15, 2006. Hershey scored twice in the first 5:53, Colin Forbes had a goal and an assist, and Freddy Cassivi stopped 25 shots as Hershey claimed a 5-1 victory at Bradley Center. Cassivi was the MVP of the Calder Cup Playoffs, outdueling current NHL All-Star goalie Pekka Rinne, and stopping the likes of future NHL’ers Shea Weber, Kevin Klein, Scotty Upshall, Jordan Tootoo and Rich Peverley.

MILWAUKEE TIES: While no players on Hershey’s active roster have skated with the Admirals in the past, two of the club’s coaches once called Milwaukee home. Assistant coach Reid Cashman, a former defender, spent part of the 2009-10 season with the Admirals. He skated in 37 games with Milwaukee, scoring 12 points (four goals, eight assists). He also appeared in two playoff games before joining Milwaukee’s ECHL affiliate, the Cincinnati Cyclones, and leading them to a Kelly Cup Championship. In addition to Cashman, Hershey’s associate goaltending coach Alex Westlund is also a former Admiral. The netminder appeared in seven games with the Admirals during their IHL days in 2000-01, he went 2-2-0 with a 2.57 goals against average and .920 save percentage. He returned to Milwaukee, now in the AHL, during the 2001-02 campaign, going 1-1-0 in five games.

NHL PIPELINE IN MILWAUKEE: The affiliation between the Milwaukee Admirals and the Nashville Predators has been one of the most successful in recent history. Last year 18 Admirals alumni led the Nashville to the Stanley Cup Finals. Notable former Admirals include Pekka Rinne, former Capitals draft pick Fillip Forsberg, Ryan Ellis, and Roman Josi. Several members of Milwaukee’s team this year also played key roles. Frederick Gaudreau, who started this season with Milwaukee, had the game-winning goal for Nashville in Game 4 of the Stanley Cup Finals versus Pittsburgh. Additionally, forward Harry Zolnierczyk, who Hershey has seen with numerous division rivals before, had three points in 11 playoff games.

STRONG STARTS: Hershey forwards Chris Bourque and Chandler Stephenson are both off to strong starts in the goal department. Stephenson scored in his first two games of the season, including a power play marker in Saturday’s loss to Belleville. Last year, it took Stephenson until Nov. 26 (19 games) to score his second goal of the year. Bourque has scored in his last two games, and is tied for the team lead with four points. Last year it took Bourque until Nov. 16, a total of 14 games, to score two goals.

MULTI-POINT TRAVIS: Hershey forward Travis Boyd has notched back-to-back multi-point games. The native of Hopkins, Minnesota has a pair of assists in each of his last two contests. Hershey’s 2016-17 team MVP notched a total of 12 multi-point games during the 2016-17 campaign, a year in which he ranked fifth in the AHL with 63 points. He currently leads Hershey with four assists, and is tied for the team lead with four points. The forward is the AHL’s active ironman with 156 straight games played.

BEARS-ADMIRALS FAST FACTS: Hershey’s 37 shots in last Sunday’s shootout loss is highest shot total Hershey has taken this season, and the most since Mar. 18 when Hershey fired 38 shots in a 6-4 win over Hartford at Giant Center…Tonight marks the start of Hershey’s first three-in-three of the season. This year the club only has 11 three-in-threes, compared to 14 last season…The Admirals are off to a 3-0-0-0 start on the season thanks to a fast-starting offense. The team has scored first in all three games this season…Milwaukee forward Tyler Kelleher is listed at just 5-foot-6, tying him for the shortest player in the AHL with Hartford’s Joe Whitney and San Antonio’s Rocco Grimaldi. Kelleher has played a big part of Milwaukee’s success, scoring three goals and an assist in the first three games…Tonight’s game will feature two Labrie’s (Hershey’s Hubert Labrie and Milwaukee’s Pierre-Cedric Labrie) and well as two O’Brien’s (Hershey’s Liam O’Brien and Milwaukee’s Andrew O’Brien)…Former Bears forward Don Biggs, who played three seasons with Hershey from 1987-90, was announced as a member of the 2018 AHL Hall of Fame Class. He won the 1988 Calder Cup with Hershey….On this date in 1998, Hershey team president Jay Feaster left the club to become the assistant general manager of the NHL’s Tampa Bay Lightning. Doug Yingst, Hershey’s General Manager, added the title of President.