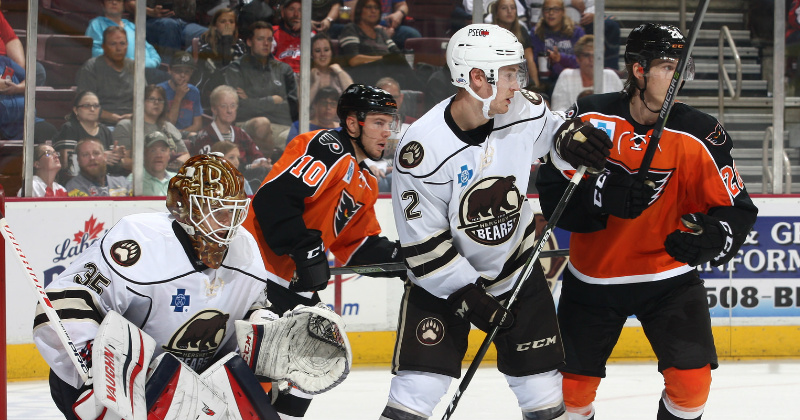 The Hershey Bears erased a two-goal deficit in the third period, but the Lehigh Valley Phantoms skated away with the two points, beating the Bears 4-3 in a shootout on Sunday night at the Giant Center. Hershey earned its first standings point of the season thanks to a game-tying goal by Colby Williams on the power play with only 2:30 to play in regulation time.

The Bears entered the third period holding a 1-0 lead thanks to Chris Bourque’s power play goal at 5:43 of the second period. However, the visiting Phantoms used its quick-strike offense to tally three straight goals. Hershey goaltender Parker Milner had been perfect through the first two periods, but Phillippe Myers was able to solve the netminder at 4:50. The defender snapped a shot that trickled through the five-hole of Milner to tie the game at one. The goal was Myers' first professional tally.

Less than a minute later, Nic Aube-Kubel put Lehigh Valley up at 5:39. The forward accepted a pass and scored in the same location as Myers, through Milner’s five-hole, to make it 2-1 Lehigh Valley. At 8:18, Danick Martel, who had a hat trick versus Hershey on Oct. 7, scored again versus the Bears, walking down the right wing and lifting a shot over the catching glove of Milner to double the Phantoms lead.

Only 18 seconds later, Hershey responded to start the comeback. Jonas Siegenthaler scored his first AHL goal to cut the lead back to one. The defender joined the play, and Wayne Simpson found him open in the slot. Siegenthaler cut in and beat Lehigh Valley goaltender Alex Lyon over the glove with a wrist shot to make it 3-2. Bourque also assisted on the goal and finished with three points on the night.

Hershey fired 12 shots in the third period, but it was a late power play that gave the Bears the tying marker. With Lehigh Valley's Martel in the penalty box for interference, Colby Williams scored his first goal of the season at 17:30. Hershey’s Travis Boyd collected his second assist of the game, sending a pass to Bourque on the right point. Bourque fed Williams for the one-timer from the left point, and the slap shot beat the diving Lehigh Valley goaltender.

After a scoreless overtime, the game progressed to a shootout. The lone marker came from former Bear Chris Conner, who beat Milner through the five-hole to end the contest in the third round and give Lehigh Valley the extra point. The loss kept Hershey winless in the shootout since Apr. 17, 2016 when they knocked off Wilkes-Barre/Scranton, 2-1, at the Giant Center.

Hershey was the stronger of the two clubs on special teams on Sunday, going 2-for-4 on the power play and a perfect 7-for-7 on the penalty kill. The Bears also outshot the Phantoms, 37-31, on the evening. Hershey fell to 0-2-0-1 while Lehigh Valley improved to 3-1-0-1.

Hershey returns to action on Friday, Oct. 21 at Milwaukee. The puck drops at 8 p.m. Eastern and Zack Fisch will have the call on the Bears Radio Network.