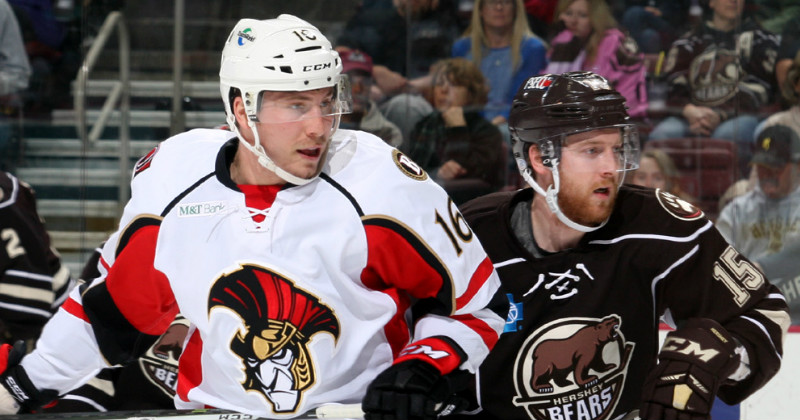 SENATORS AT BEARS: The Hershey Bears host the Belleville Senators this evening in the home opener of the club’s historic 80th Anniversary Season. The Bears return to the Giant Center this season the longest continuously operating member club of the league still playing in its original city. Tonight marks the first all-time contest between Belleville and Hershey. The Belleville franchise is the AHL club of the Ottawa Senators, and spent the past 15 years playing in Binghamton.

HOME OPENER HISTORY: The Bears have led the AHL in attendance for 11-straight seasons, so it’s no surprise that the club is one of the AHL’s most successful teams on home ice each season. The home opener is no different for the Chocolate and White. The Bears enter tonight riding a three-game win streak in home openers, and a 6-3-1-0 record over the past 10 seasons. Last year the Bears defeated Bridgeport 5-2 in the home opener on Oct. 22, while in 2015, current Bear Chris Bourque provided overtime heroics as the Bears knocked off Hartford, 3-2.

LAST TIME OUT: The Bears opened the 2017-18 campaign last Saturday with a 7-2 loss versus Lehigh Valley at the PPL Center. Hershey got second period goals from Chandler Stephenson and a power play marker from John Albert, but a four-goal third period for the Phantoms undid the Bears. Netminder Parker Milner made 24 saves in the loss for Hershey while Lehigh Valley’s Danick Martel had a hat trick. While the Bears come into tonight’s game fresh, the Senators will get right back at it after skating to a 4-2 loss last night in Syracuse. The Senators play the fourth game of a nine-game road trip this evening.

SUCCESS VERSUS SENS: While they may call a new city home this season, Hershey can still boast past successes versus the Senators franchise. The Bears went 4-2-0 versus the Binghamton Senators last year and come into tonight’s game with a three-game winning streak versus the Ottawa Senators minor league club. Of returning players, veteran Chris Bourque led the way versus the Senators, scoring five points (four goals, one assist) in the six head-to-head meetings last season. Over the past five seasons, the Bears are 23-11-3-3 versus the Senators, including a 12-5-2-1 mark at the Giant Center.

MILNER TIME: Hershey’s top two goalies, Pheonix Copley (lower body) and Vitek Vanecek (lower body) both missed the opening contest of the season and are not expected to play this weekend. That means for the time being, the net belongs to Parker Milner who stopped 24 shots in last Saturday’s loss. Milner is now 3-3-0 in six games over the past two seasons with the Bears. Last season with South Carolina (ECHL), Milner ranked seventh in minutes played (2520) and had a 2.72 goals against average and a .900 save percentage. He led the Stingrays to the Kelly Cup Finals, appearing in all 22 playoff games with a 12-10 record and three shutouts. Milner was a two-time NCAA Champion at Boston College and was the MVP of the 2012 NCAA Tournament.

O’BRIEN, O’BRIEN: Both teams will have an O’Brien in the lineup tonight. Belleville’s roster features veteran and former Bear Jim O’Brien. The native of Maplewood, Minnesota, has played in 377 AHL games, scoring 208 points. He spent the 2014-15 season wearing the Chocolate and White, skating in 32 games with Hershey and scoring 29 points. Hershey’s roster features Liam O’Brien, a native of Halifax, Nova Scotia. The scrappy forward posted career bests in games played (64), goals (10), assists (20), and points (30) last year with the Bears.

BURGY’S BACK: When the Belleville Senators take the ice tonight, they’ll feature a familiar face. Former Bear Erik Burgdoerfer is in his first season anchoring the Belleville blue line. He spent two seasons with Hershey, appearing in 132 games and notching seven goals and 20 assists. He also helped lead the charge as Hershey advanced to the 2016 Calder Cup Finals. Burgdoerfer, who also played for Troy Mann as a member of the ECHL’s Bakersfield Condors, played with Rochester last season and made his NHL debut with the Buffalo Sabres on Dec. 5, 2016.

REGINA REAR GUARDS: Troy Mann’s lineup is slated to feature the defensive pairing of Colby Williams and Connor Hobbs this evening. Both players hail from Saskatchewan, played junior hockey for the Regina Pats, and spent time as a defensive pair. Hobbs was a fifth-round selection in 2015, while Williams was a sixth-round pick the same year. Williams, Hershey’s Rookie of the Year last season, tallied a pair of assists in Hershey’s loss last Saturday in Allentown. This was the first multi-assist performance for the second-year defenders, and only the third multi-point game in Williams’ young career. Tonight will mark the professional debut for Hobbs. The 20-year-old enjoyed a record-breaking season with Regina last year, posting 85 points (31 goals, 54 assists) in 67 games. In addition to Williams and Hobbs, Hershey’s Garrett Mitchell and Chandler Stephenson also played junior hockey for Regina.

WELCOME BACK MY FRIENDS: Hershey’s roster features 17 returning players including captain Garrett Mitchell, and alternate captains Zach Sill and Chris Bourque, the AHL’s active leading scorer with 639 career points. Hershey’s team MVP Travis Boyd, who led the club with 63 points, is also back. as well as top goaltenders Vitek Vanecek, and Pheonix Copley, who went 11-5-0 for the Bears after being re-acquired from the St. Louis Blues in February. However, Hershey is without their top four goal scorers last season as Paul Carey (24 goals, New York Rangers), Christian Thomas (24 goals, W-B/Scranton), Stanislav Galiev (21 goals, KHL) and Jakub Vrana (19 goals, Washington) have all moved on. The club will need to replace 61% of its offense from last season.

BEARS-SENATORS FAST FACTS: The Bears also played the Senators in the second game of the season last year. That game was played in Binghamton and was one of the Senators’ two wins versus Hershey in 2016-17. The Senators beat Hershey 3-0 as Chris Driedger earned a 25-save shutout…Hershey players who could make their professional debuts tonight are Connor Hobbs, Mason Mitchell, and Kris Bindulis. Adam Carlson is also looking to make his AHL debut… Francis Perron, Marcus Hogberg, Kyle Flanagan and Ben Sexton did not make Belleville’s road trip to Syracuse and Hershey due to unspecified injuries, while goaltender Chris Driedger still remains out.