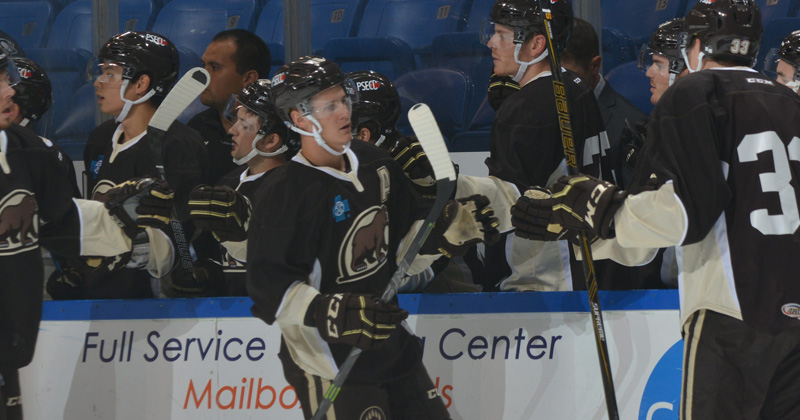 Forwards Dustin Gazley and Mathias Bau led the way as the Hershey Bears scored a 5-1 win over the Wilkes-Barre/Scranton Penguins in Wednesday's preseason opener at the Mohegan Sun Arena. Gazley had two goals and an assist, Bau notched three assists, and netminder Parker Milner went the distance in goal, stopping 17 Wilkes-Barre/Scranton shots to earn the victory.

It didn't take Gazley and the Bears long to find the back of the net. Just 2:50 into the contest, the forward struck on the power play to give the Chocolate and White a 1-0 lead. Hershey's Matt Carey fired a shot from the slot that Wilkes-Barre/Scranton netminder Colin Stevens kicked out, but the rebound popped loose to Gazley on the left wing. He snapped a shot through Stevens to give the visitors the early advantage. Defender Connor Hobbs also assisted.

Hershey blew open the game offensively in the second period. At 7:15, the Bears doubled the lead on another goal off a rebound. Hershey forward Andrew Cherniwchan drove down the right wing, and fired a shot off the right pad of Stevens. The rebound sat loose in the slot, and Gustafsson cashed in with his first goal of the preseason to make it 2-0.

Hershey's top line of Gazley, the 6-foot-7 Bau, and experienced AHL forward Jeremy Langlois dominated the final minutes of the second period. It was Langlois who struck next after being left uncovered in front of the Penguins net. Bau skated down the left wing and just missed on a shot to the far post. The puck deflected to Gazley on the right wing, and he centered to a wide-open Langlois. The former Rockford forward beat Stevens through the five-hole to give Hershey a commanding 3-0 lead at 16:39.

In the closing minute of the middle frame, Gazley tallied his second goal of the evening, finishing a give-and-go with Bau. Gazley hopped on a loose puck, sending a pass across to Bau on the right wing. He returned the favor, firing a cross-crease pass to Gazley on the backdoor for an easy tap-in at 19:17.

In the third period, Hershey's power play connected for a second time with just a second to spare. Stephen Collins, a forward on a tryout with the Bears, scored on a scramble in front of new Wilkes-Barre/Scranton netminder Will King with just one second left on the power play. Hershey's Tim McGauley jammed a puck to the net that was poked at by Bau, but it was Collins on the left wing who got the last touch on the goal. The assist was Bau's third helper of the evening.

Milner was strong in goal for Hershey, stopping Cody Wydo on a breakaway in the first period, and holding Wilkes-Barre/Scranton off the board until a late tally from Tom Mele in the closing minutes of the third period.

Hershey outshot Wilkes-Barre/Scranton 31-18 in the contest. The Bears were 2-for-8 on the power play while the Penguins were 0-for-2

Hershey finishes the preseason with a rematch with the Penguins on Saturday evening at the Giant Center. The puck drops at 7 p.m. Seating is general admission and all tickets are just $12. Tickets may be purchased at the Giant Center Box Office, by calling (717) 508-BEAR or by visiting HersheyBears.com.

The Hershey Bears 2017-18 season is almost here! The puck drops on the historic 80th anniversary season with the home opener on Saturday, Oct. 14 versus Belleville. Information on the 2018 Capital BlueCross Outdoor Classic, full season tickets, 22-game and 12-game plans and flex-10 ticket plans for the 2017-2018 season is available now by calling (717) 508-BEAR or by visiting HersheyBears.com. Flexible ticket plans start as low as $195 per seat.