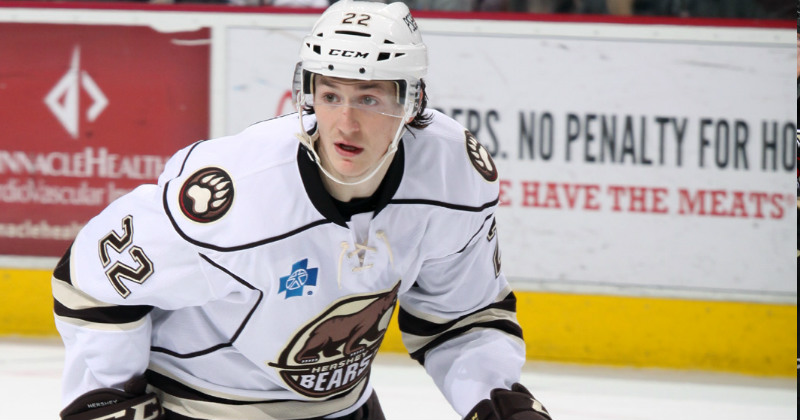 The Hershey Bears announced today that the club has re-signed forward Dylan Margonari to a one-year, American Hockey League contract. The announcement was made by Vice President of Hockey Operations, Bryan Helmer.

Margonari, 25, returns to the Hershey organization after skating with the club's ECHL affiliate, the South Carolina Stingrays, in the 2016-17 campaign. In his rookie season, Margonari appeared in 32 games with the Stingrays, scoring 17 points (11 goals, six assists) and posting 18 penalty minutes. The native of Greensburg, PA had his season cut short when he sustained an upper body injury on Jan. 28.

The 6-foot-1, 190-pound forward signed with Hershey last summer after appearing in a pair of games with the Bears on a professional tryout at the end of the 2015-16 season. In April of 2016, Margonari dressed in Hershey's final two games of the regular season before joining the Stingrays, where he appeared in four 2016 Kelly Cup Playoff contests.

The Hershey Bears 2017-18 season is almost here! The puck drops on the historic 80th anniversary season with the home opener on Saturday, Oct. 14 versus Belleville. Information on the 2018 Capital BlueCross Outdoor Classic, full season tickets, 22-game and 12-game plans and flex-10 ticket plans for the 2017-2018 season is available now by calling (717) 508-BEAR.  Flexible ticket plans start as low as $195 per seat.