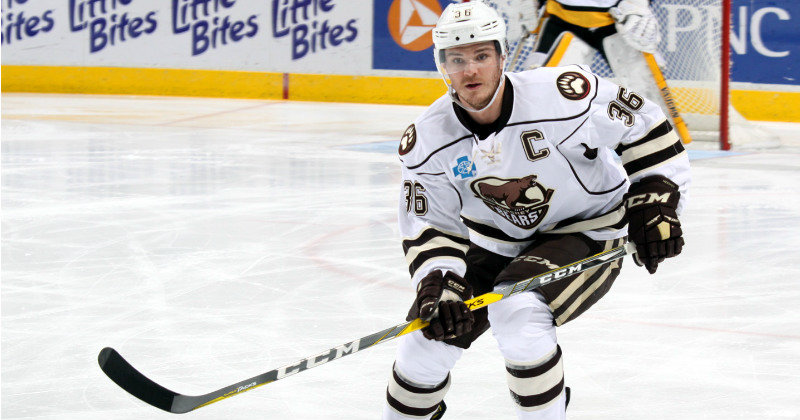 The Hershey Bears announced today that forward Garrett Mitchell has agreed to a one-year, American Hockey League contract for the 2017-18 season. The announcement was made by Vice President of Hockey Operations Bryan Helmer.

"We're extremely happy to have our captain back for another season," said Helmer. "Garrett Mitchell is a great leader both on and off the ice, and plays a large role in the Hershey community. As we chase a 12th Calder Cup, we believe Garrett is the perfect person to lead our team and set a great example for younger players. He does all the little things right, and is a true professional."

Mitchell, 25, has spent the past six seasons in Hershey. After serving as an alternate captain for two seasons, Mitchell was named the 43rd captain in franchise history on Oct. 8, 2015 and has worn the "C" for Hershey for the past two seasons. The native of Regina, Saskatchewan has skated in 353 AHL games, all with Hershey, scoring 102 points (46 goals, 56 assists) and logging 560 penalty minutes. He has also appeared in 52 playoff games with the Bears, scoring 10 points (four goals, six assists).

"My family and I are thrilled to be coming back to Hershey," said Mitchell. "After coming in as a wide-eyed kid, I've been here now going on seven seasons. Not a lot of guys in this league can say that. Hershey is a community that we love, and we're proud to put down some roots here. We've come close to a championship in my time here, but I come back with the goal to be playing until mid-June and winning a Calder Cup. Last year, I think we showed the ability to make a run, and that was a big part of my decision to come back."

The 5-foot-11, 196-pound forward appeared in 71 games last season for Hershey, scoring 20 points (10 goals, 10 assists). He tied a career-high with 121 penalty minutes, good for second on the club. The winger also made his NHL debut during the 2016-17 season. Mitchell, originally a sixth round selection (175th overall) of the Washington Capitals in 2009, earned his first NHL call-up in April. He skated in Washington's regular season finale on Apr. 9, a 2-0 loss to Florida. Mitchell was credited with two hits and was named the game's third star.

Prior to turning professional, Mitchell was the captain of the Regina Pats of the Western Hockey League. From 2007-11, Mitchell played 264 games with Regina, scoring 112 points (51 goals, 61 assists). He also made brief appearances in Hershey following the conclusion of his junior seasons, playing one game with the Bears in 2009-10, and two contests in 2010-11. He made his AHL debut on Apr. 6, 2010 in a 3-1 loss to Syracuse.