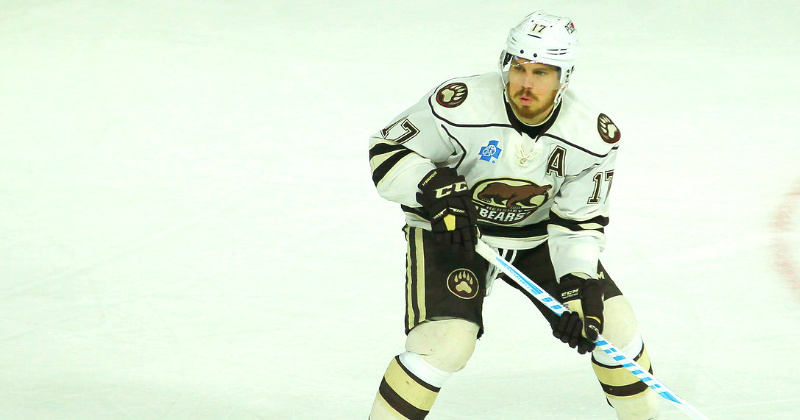 Chris Bourque Returns to Hershey for 2017-18

The Hershey Bears announced today that forward Chris Bourque has agreed to a one-year, AHL contract for the 2017-18 season that includes a mutual option for 2018-19. The announcement was made by Vice President of Hockey Operations Bryan Helmer.

“We are beyond thrilled to have Chris Bourque return to Hershey for the 2017-18 season,” said Helmer. “Chris has done so much for the Bears in his illustrious career. He is one of the premier players in the AHL and has become a fantastic veteran leader for our club. His impressive resume and body of work speaks for itself. We are excited to have Chris, one of the all-time greats in AHL history, and his family, back in Hershey through at least 2018.”

The forward has collected 533 points (179 goals, 354 assists) in 540 regular season games with the Bears. He ranks seventh in team history in points, tied for ninth in goals, and fifth in assists. He also ranks first in franchise history with 86 points in the playoffs. In 2016-17, Bourque notched his 600th career AHL point, tallying an assist in a 6-2 loss at Wilkes-Barre/Scranton on December 10. He made his fifth AHL All-Star Classic appearance in January, serving as the playing captain for the Eastern Conference. Bourque, who serves as an alternate captain with Hershey, finished ninth in the AHL in scoring with 60 points (18 goals, 42 assists) in 2016-17. He led the Bears with 10 points (six goals, four assists) in 12 playoff contests.

“My family and I are very excited to be coming back,” said Bourque. “We really do love Hershey. We’ve had some great memories here and we’re looking forward to building some new ones going forward. I take a lot of pride in being a Hershey Bear. Every night I get to put that sweater on is an honor for me. I just love being part of the community and playing in front of the great fans at Giant Center.”

Bourque enters his ninth season with the Bears in 2017-18. He is the AHL’s career scoring leader among active players with 639 points (219 goals, 420 assists) in 658 games with Hershey, Hartford, Providence, and Portland. Bourque has captured two AHL scoring titles (2012, 2016) and was named league MVP for the 2015-16 regular season. A 31-year-old Boston native, Bourque also ranks among the AHL’s all-time playoff leaders with 82 assists (first) and 117 points (fourth) in 133 postseason games played (second), winning three Calder Cup championships with Hershey (2006, 2009, 2010) in five trips to the Finals and earning MVP honors for the 2010 postseason. Bourque, who has also skated in 51 National Hockey League contests with Washington, Pittsburgh and Boston, has been a First Team AHL All-Star selection three times.