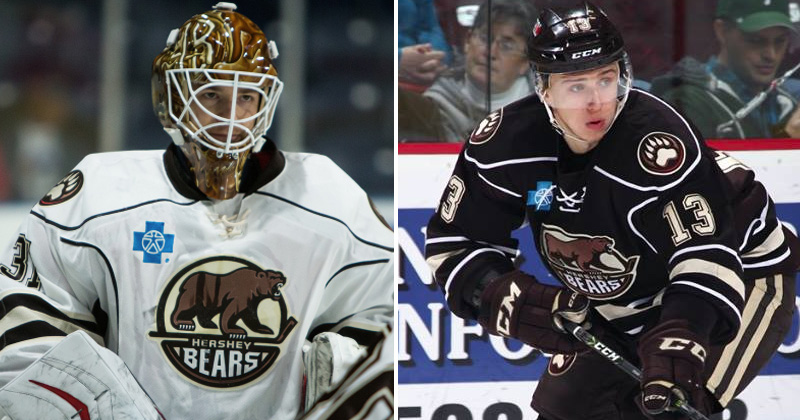 (Hershey, PA- February 3, 2017)-The Hershey Bears announced a pair of roster moves ahead of tonight’s game in Binghamton. Forward Jakub Vrana has been recalled by the Washington Capitals, and the Bears have recalled goaltender Parker Milner from the South Carolina Stingrays of the ECHL.

Vrana, 20, has tallied 24 points (13 goals, 11 assists) in 30 games with Hershey this season. He is tied for second on the team in goals and has scored in his last two contests for the Bears.

The native of Prague, Czech Republic has skated in 12 games with the Capitals this season, posting three points (one goal, two assists). He made his NHL debut on Dec. 1 against the Islanders and scored his first NHL goal on Dec. 9 at Buffalo. Vrana tallied his first multi-point game with two assists on Dec. 13 against the Islanders. The Capitals drafted Vrana in the first round, 13th overall, in the 2014 NHL Draft.

Milner, 26, made his Hershey debut in last Saturday’s 4-2 victory in Springfield. Milner stopped 30 of 32 shots to earn his seventh career AHL victory, and his first as a member of the Bears. With South Carolina, the Pittsburgh, PA native has posted a 17-10-0 record and a .905 save percentage this season with the Stingrays. Milner’s 2.53 goals against average is the third best mark in the ECHL, and his 17 victories are tied for the fourth most in the ECHL.

The Bears return to action in Binghamton tonight at 7:05 p.m. Hershey returns home to Giant Center on Saturday to host the St. John's IceCaps at 7 p.m. It's Chocolate Covered February, Faith & Family Night, and there will be a CommunityAid Clothing Drive that evening. On Sunday, Hershey hosts St. John's for a special 2 p.m. puck drop.