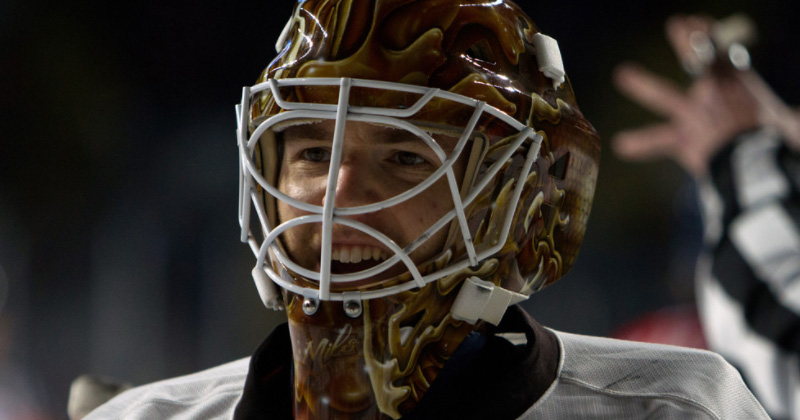 (Springfield, MA- January 28, 2017)-Parker Milner made 30 saves in his Hershey debut and Liam O’Brien scored with just over three minutes to play as the Bears topped the Springfield Thunderbirds 4-2 on Saturday night at the MassMutual Center. In three road games this week, Hershey collected five of a possible six points, going 2-0-0-1.

For the second straight game, Jakub Vrana opened the scoring for the Bears, notching his 13th goal of the season at 14:22 of the first period. Darren Dietz maneuvered the puck to Vrana on the right wing. He beat Springfield defender Mike Downing and raced to the goal. With puck rolling, he one-handed a shot to the net that Springfield goaltender Reto Berra fumbled, and knocked in the net to make it 1-0 Hershey.

The Thunderbirds would collect a pair of goals to take the lead. Tim Bozon tallied the equalizer, scoring on the power play at 17:18 of the first period. Early in the second period, Jayce Hawryluk gave Springfield a 2-1 lead, snapping a wrist shot from the crease past Milner.

Hershey would even the score at the 15:17 mark of the second period on a highlight reel goal from Zach Sanford. With Hershey shorthanded, Sanford skated the puck down the left wing. He toe-dragged around forward Sena Acolatse, and lifted a backhander over the glove of Berra to make it 2-2. The goal was Sanford’s ninth of the season and his second shorthanded goal of the year.

In the third period, O’Brien broke the deadlock, scoring his sixth goal of the season at 16:32. Dietz saved the puck from clearing the zone and fed Steve Weinstein on the goal line. The defender centered a pass to O’Brien, and the forward beat Berra blocker side to make it 3-2 Hershey. Chris Bourque would add an empty net goal at 18:09 to seal the win for the Bears.

Milner, called up from the South Carolina Stingrays of the ECHL earlier this week, impressed in his debut, stopping all 11 shots he faced in the third period.

The Thunderbirds outshot Hershey 32-26. Hershey went 0-for-5 on the power play while Springfield was 1-for-3. Hershey is now 5-0-0-0 versus Springfield this season.

The Bears now will break for the 2017 AHL All-Star Classic. Forwards Chris Bourque and Travis Boyd will represent the Bears at the event in Allentown, PA on Jan. 29-30. Hershey returns to action next Friday in Binghamton.