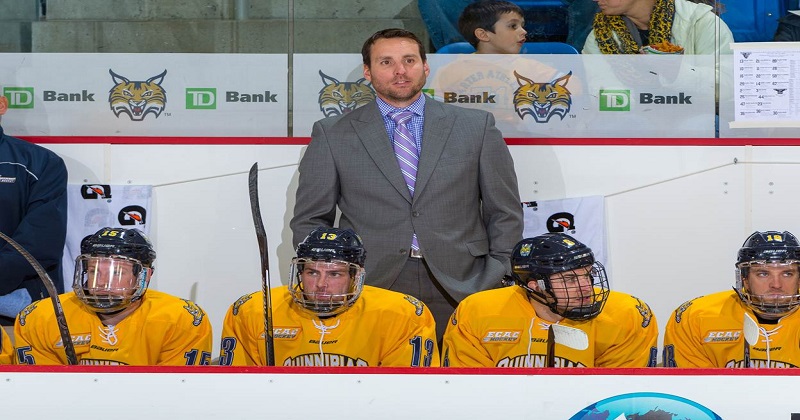 (Hershey, PA – July 27, 2016) – The Hershey Bears announced today that Reid Cashman has been named the new assistant coach of the Bears, filling the role Bryan Helmer held before being named the team’s new Vice President of Hockey Operations.

“Throughout our search for a new Assistant Coach we found Reid to be the perfect fit in joining our coaching staff,” says Troy Mann, head coach of the Hershey Bears. “I look forward to reuniting with Reid, continuing with the development of our young prospects and our quest for the Bears 12th Calder Cup. We are excited to welcome Reid and his wife Stefanie to Hershey.”

Reid was coached by Mann during the 2007-2008 season when Mann was head coach of the Columbia Inferno (ECHL), the then affiliate of the Toronto Maple Leafs (NHL).

“I’m very excited to work with Troy Mann once again. I learned so much from him as a player and look forward to growing as a coach under his guidance and leadership,” says Reid Cashman, new assistant coach of the Hershey Bears. “I’m also beyond thrilled to be part of such a historic organization.”

The 33 year-old, Minnesota native, graduated from Quinnipiac University. Following college, he played various East Coast Hockey League (ECHL) and American Hockey League (AHL) teams during his five-year professional career. In 2011, Cashman returned to Quinnipiac University as a coach, where he has been for the past five seasons. This past season, Cashman assisted in the team clinching a school high record of 32-4-7 with 43 points.

Reid is the current record-holder at Quinnipiac University for career assists with 125. He also holds the single-season defenseman records for assists in 2006-2007 with 35 and in 2004-2005 with 45.

Reid currently resides in Cheshire, Connecticut, with his wife, Stefanie. They will be relocating to Hershey, PA, for the upcoming hockey season.

About Hershey Bears: The 2016-17 season will mark the Bears’ 79th anniversary season with the league. The team calls GIANT Center home.  The Bears have led the league in regular season attendance for the past ten consecutive seasons. Visit www.HersheyBears.com and follow Hershey Bears on our social media channels for ongoing team and schedule updates.

Words in boldface are used under license.

Hershey Entertainment & Resorts is proud to help fulfill the dream of our founder,

school in the world, as it continues to provide opportunities for children in need.