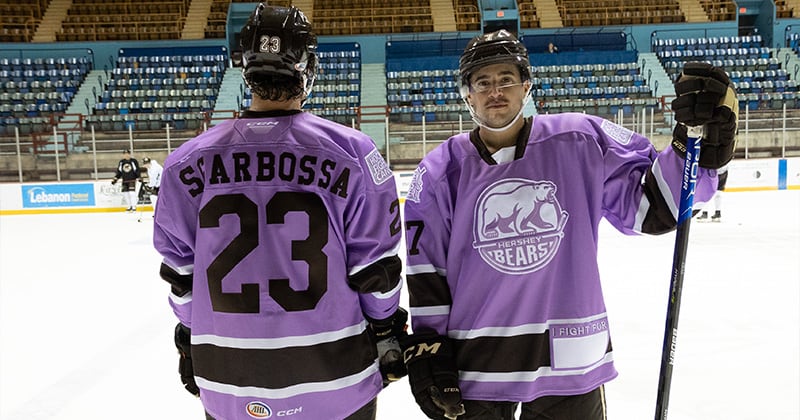 LAST TIME OUT:
Hershey continued its winning ways at GIANT Center last night, claiming a sixth straight win on home ice, in a 6-1 victory over the Hartford Wolf Pack. Hershey scored three times in the opening frame, chasing Hartford starting goaltender Louis Domingue after just 20 minutes. Mason Morelli opened the scoring at 9:50, Henrik Borgstrom struck at 16:50, and Garrett Pilon scored with less than two seconds left in the period to give the Bears a commanding lead. Sam Anas continued the onslaught with his fourth goal of the season at 5:50 of the middle frame, and Mike Vecchione and Hendrix Lapierre added tallies before the period ended. Hunter Shepard earned the win in goal for the Bears with 18 saves, as Hershey outshot Hartford 32-19.

HOCKEY FIGHTS CANCER:
Joining the efforts of the National Hockey League, tonight's Hockey Fights Cancer Night unites the hockey community in support of cancer patients and their families. When the Bears take the ice, players will be wearing Hockey Fights Cancer jerseys that will be auctioned off post game to benefit local charities, as part of Hershey's community-focused Hershey Bears Cares initiative, including Leukemia & Lymphoma Society and American Cancer Society. Fans are encouraged to participate in a "Moment of Fight'', scheduled to take place during a timeout in the second period.

HOCKEY FIGHTS CANCER HISTORY:
Tonight's event is Hershey's fourth Hockey Fights Cancer Night. The club hosted the first event on Nov. 4, 2018, as Hershey took down Hartford, 2-1 in a shootout. Juuso Ikonen scored his first AHL goal and Parker Milner turned aside 32 shots and went 7-for-7 in the shootout. Current Hershey defender Aaron Ness scored the shootout winner that evening. Hershey is 3-0-0-0 all-time on Hockey Fights Cancer Night, also winning in 2019 and 2021 versus the Charlotte Checkers.

OFFENSIVE OUTBURST:
Hershey collected a season-high six goals in last night's win, and the 6-1 win was also the Chocolate and White's largest margin of victory this season. In total, 14 different Bears got on the scoresheet yesterday, while Sam Anas, Mason Morelli, Garrett Pilon, and Henrik Borgstrom all finished with a goal and an assist in the triumph. At GIANT Center this season, the Bears have now outscored opponents 30-14, and Hershey is still unbeaten in regulation on home ice this season, holding a league-best 8-0-1-0 record.

BEARS BITES:
Hartford did not have a power play in last night's game and Hershey tied a season-low with just two penalty minutes...Sam Anas scored his 100th AHL goal in last night's victory...Henrik Borgstrom's goal last night was his first tally in 10 games and is one point away from 100 in his professional career...Hershey forward Hendrix Lapierre has goals in three of his past four games and points in five of his last six outings...After tonight's game, four of the next five contests will be on the road for the Chocolate and White.