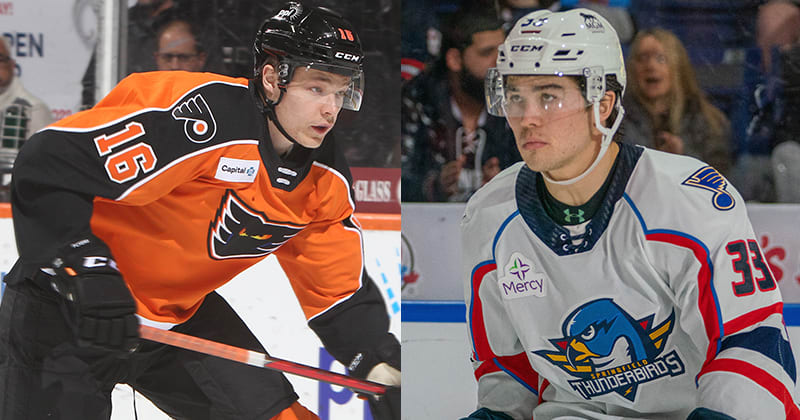 Bears Agree to Terms with Kim and Strome on AHL Contracts

The Hershey Bears announced today that the club has signed defenseman Michael Kim and forward Matthew Strome to American Hockey League contracts for the 2022-23 season. The announcement was made by Hershey's vice president of hockey operations Bryan Helmer.

Kim, 27, appeared in 26 games with the Springfield Thunderbirds last season, registering seven assists. The Toronto, Ontario native split time with the ECHL's Maine Mariners where he collected 21 points (2g, 19a) in 33 games. He also added three helpers in six playoff games for Maine.

The 5'11", 195-pound blue liner has skated in 49 career AHL games with Wilkes-Barre/Scranton and Springfield, posting 10 assists. He has also notched 52 points (6g, 46a) in 123 career ECHL games with Wheeling and Maine.

Prior to turning pro, Kim played four seasons at Boston College, serving as a co-captain for his junior and senior year. He helped the Eagles to a Hockey East Championship in 2018 and earned conference Third All-Star Team honors.

Strome, 23, appeared in 63 games for the Lehigh Valley Phantoms last season, scoring 16 points (5g, 11a), while also registering seven points (3g, 4a) in six games for the ECHL's Reading Royals.

The Mississauaga, Ontario native was selected by Philadelphia in the fourth round of the 2017 NHL Draft and has split his first three professional seasons between the AHL and ECHL. In his AHL career with Lehigh Valley, Strome has amassed 23 points (8g, 15a) in 91 games, while he's posted 34 points (15g, 19a) in 57 ECHL games with Reading and Greenville.

The 6'4", 210-pound winger was an Ontario Hockey League champion with Hamilton in 2018 and served as the club's captain in 2018-19 when he finished second on the team in scoring with 79 points (28g, 51a). Strome's eldest brother, Ryan, is a forward for the Anaheim Ducks, while his other brother, Dylan, was signed this summer by Hershey's NHL affiliate, the Washington Capitals, after skating with the Chicago Blackhawks last season.

The Bears open the 2022-23 season, presented by Penn State Health, versus the Utica Comets at 7 p.m. on Saturday, Oct. 15 at GIANT Center featuring a PNC Bank Magnet Schedule giveaway for the first 8,000 fans, plus a pre-game Opening Night Red Carpet Event. Single game tickets are on sale now, and for a limited time, receive a FREE ticket for kids 12 and younger with the purchase of a regular admission ticket when you buy online. Click HERE for more.