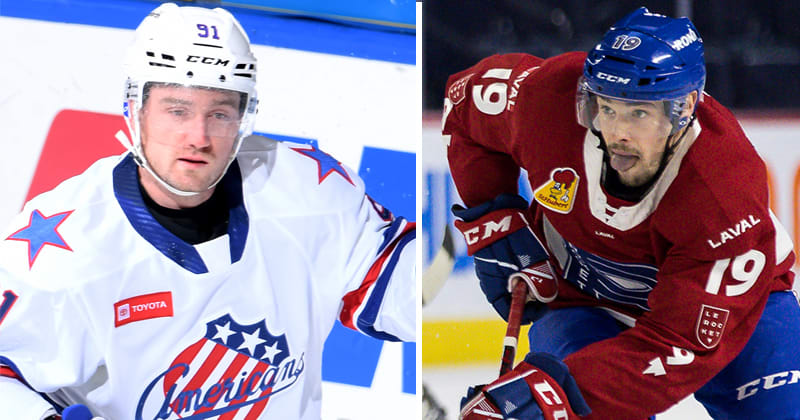 The Hershey Bears announced today the club has signed forwards Alexandre Fortin and Ryan Scarfo to American Hockey League contracts for the 2022-23 season. The announcement was made by Hershey's vice president of hockey operations Bryan Helmer.

Fortin was a Quebec Major Junior League champion with Rouyn-Noranda in 2016.  His uncle Jean-Sebastien Giguere was an All-Star goaltender who won the Stanley Cup for Anaheim in 2007. Fortin's cousin, Cam Lee, spent the last two seasons with Wilkes-Barre/Scranton and currently plays in the KHL.

Scarfo, 28, compiled 12 points (4g, 8a) in 63 games for the Rochester Americans last season. He also appeared in one playoff game for the Amerks. The native of North Chelmsford, Mass. has played in 128 career AHL games with Belleville, Wilkes-Barre/Scranton, and Rochester, striking for 28 points (10g, 18a).

The 6', 205-pound center has also played in 58 career ECHL games for Brampton and Wheeling, recording 29 points (14g, 15a). Prior to turning pro, Scarfo played NCAA hockey at Union College for four seasons. He played three years alongside Hershey forward Mike Vecchione, and led the club in goals during his senior campaign in 2017-18 with 20.

The Bears open the 2022-23 season, presented by Penn State Health, versus the Utica Comets at 7 p.m. on Saturday, Oct. 15 at GIANT Center. Single game tickets go on sale on Thursday, Sept. 1 at 10 a.m. Fans may join the Season Ticket Holder community with plans starting at less than $12 per game. Choose your games and seats with Full and Partial plans available now. Click HERE for more.