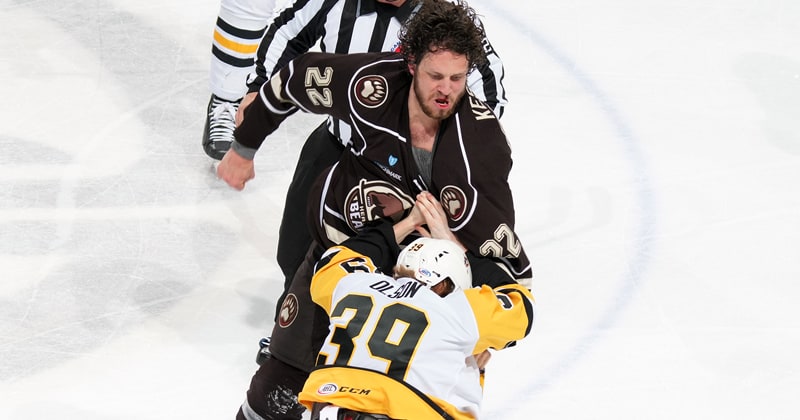 The Hershey Bears announced today that the club has re-signed forward Kale Kessy to a two-year American Hockey League contract.

Kessy, 28, played in 21 games with Hershey during the 2020-21 season, registering six points (2g, 4a). He logged 115 penalty minutes, the most of any player in the American Hockey League. The native of Shaunavon, Saskatchewan served as Hershey's alternate captain at times and skated in his 200th AHL game in the club's season opener on Feb. 6 versus Lehigh Valley.

The 6'3", 212-pound winger enters his third season with the Bears in 2021-22. He skated in 24 games with the club in 2019-20, registering 102 penalty minutes. That year, he was named Hershey's IOA/American Specialty AHL Man of the Year for his outstanding contributions to the Hershey community.

Kessy has played in 220 career AHL games with Bakersfield, Cleveland, Colorado, Hershey, Oklahoma City, and Manitoba, tallying 35 points (15g, 20a) and 603 penalty minutes. Kessy was a fourth round selection of the Phoenix Coyotes in the 2011 NHL Draft.