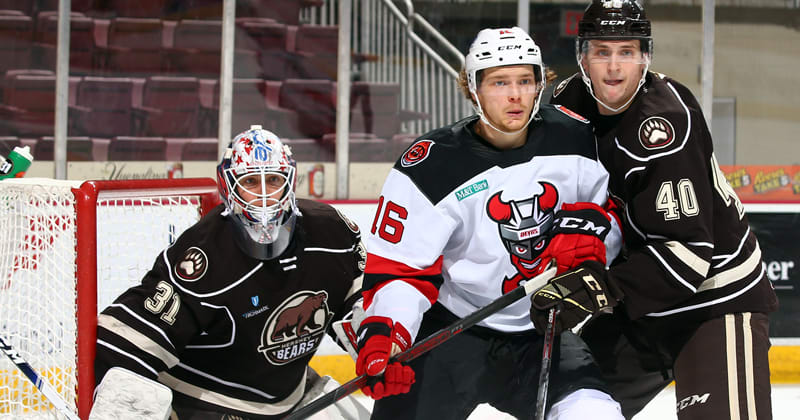 Connor McMichael scored the game-winning goal, and Pheonix Copley stopped 29 shots to lead the Hershey Bears to a 4-2 victory over the Binghamton Devils on Saturday afternoon at GIANT Center. The win improved Hershey's record to 12-5-2-0 on the season.

McMichael struck twice on the afternoon for the Bears, posting the game's opening marker just 1:33 into the contest. After a chance from Axel Jonsson-Fjallby in tight, McMichael dug the puck out from behind the net and chipped a shot past Binghamton goaltender Gilles Senn to make it 1-0 Hershey.

The Devils tied the game at 14:25 of the first period as Ben Thomson connected on the wrap around, beating Copley to the left post for his 4th goal of the season to tie the score, 1-1.

The second period was dominated by the Devils, as they held a 14-5 shot advantage. Thanks to strong goaltending from Copley, it was Hershey who scored the only marker of the period at 13:54. With the action 4-on-4, defender Reece Willcox spun off the pressure in the corner and fed fellow blue liner Cameron Schilling at the top of the crease. Schilling's first chance was denied, but he jammed home the rebound for his 2nd goal of the season to put Hershey ahead, 2-1.

Hershey held the lead until 14:15 of the third period when Binghamton's Tyler Irvine struck in transition for his first AHL goal to tie the game, 2-2.

Once again, McMichael came up big in a clutch moment. Off a turnover at 16:46, Jonsson-Fjallby stole the puck inside the offensive zone blue line and left it for McMicheal. The rookie snapped a shot from the left wing that beat Senn over the blocker to make it 3-2 Hershey. With the goal, McMichael now leads the club with eight tallies. He has four game-winning goals this season, the most of anyone in the American Hockey League.

Brian Pinho sealed the win for the Bears with a shorthanded empty-net goal at 19:36. Jonsson-Fjallby assisted on the marker, giving him a three-assist game, a new single-game high in assists and points.

Copley won his third straight game between the pipes with the strong performance. Both teams failed to score on the power play with Hershey going 0-for-4 and Binghamton finishing 0-for-5. The Devils outshot the Bears 31-20. Hershey is now 6-1-0-0 versus the Devils this season.

The two teams rematch on Wednesday evening in Newark. The puck drops at 7 p.m. and the game may be heard on the Highmark Bears Radio Network and viewed on AHLTV.