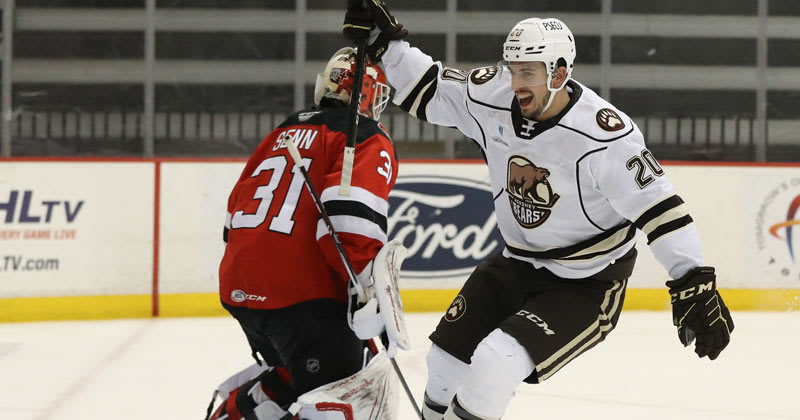 Weekly Release #3: Bears Off to Best Start in a Decade

The Hershey Bears earned a pair of victories last week, and the club enters its busiest stretch yet with a five-game point streak to start the shortened 2021 American Hockey League season. The Bears hold a 3-0-2-0 record through the first five games, tying them with Rochester for the most points in the North Division. Hershey will play three games in four days this week, visiting Wilkes-Barre/Scranton on Wednesday, traveling to Newark to go head-to-head with Binghamton, and hosting the Devils in the back half of a home-and-home on Saturday afternoon at GIANT Center.

The Bears improved to a perfect 2-0-0-0 on the road this season with a 2-1 win last Wednesday over the Binghamton Devils. Ilya Samsonov, who was making his second start with the Bears during a brief re-assignment from Washington, made 22 saves in net to earn the win. Second-year forward Brett Leason led the way for the Bears, scoring his first goal of the season in the second period and posting a team-high seven shots on net. Rookie forward Damien Riat broke a 1-1 tie in the third period to help Hershey earn the victory. Hershey out shot Binghamton 43-23 in the win.

The Chocolate and White earned their first win of the season on home ice this past Saturday, skating by the Wilkes-Barre/Scranton Penguins by a 3-1 score. After an early power play goal for the Penguins, Washington Capitals’ top prospect Connor McMichael tied the game on the power play for Hershey at 8:39 of the first period. McMichael would add the go-ahead goal at 1:19 of the second period, stealing the puck at his own blue line and racing in on a breakaway, beating Wilkes-Barre/Scranton goaltender Max Lagace over the glove to make it 2-1 Hershey. The rookie would finish off the hat trick in the closing minute of the third period, scoring on the empty net to give the Bears the win. The two-goal margin was the first time the Bears did not play a one-goal game this season.

STRONG START: Hershey has points in every game this season (3-0-2-0), giving the club its first five-game point streak to start a season since 2011-12. That year, with a roster that featured current Hershey assistant coach Patrick Wellar, the Bears started the season 4-0-1-0. The last time the Bears opened the season with points in six or more straight games came during the 2006-07 season. Under the direction of head coach Bruce Boudreau, the defending champion Bears started the season with points in nine straight games (8-0-0-1).

McMICHAEL MAGIC: Rookie Connor McMichael dazzled last Saturday, posting his first professional hat trick, scoring all three goals in Hershey’s 3-1 win over Wilkes-Barre/Scranton. McMichael became the first Bear, and the first Bears rookie, to score a hat trick since Joe Snively (Feb. 25, 2020 vs Charlotte). A hat trick was no rare feat for McMichael at the junior level, as he had six hat tricks last season with London of the Ontario Hockey League. McMichael is the first 20-year-old Bear to score a hat trick since Oskar Osala, who tallied three goals versus Philadelphia on Nov. 15, 2008. McMichael currently leads the Bears in goals (4), power play goals (2), and game-winning goals (2).

DYNAMITE DAMIEN: Rookie forward Damien Riat scored his first American Hockey League goal last Wednesday, and the tally stood up as the winner in the 2-1 decision in Newark. The goal came on fellow Swiss native Gilles Senn, who Riat played with internationally prior to moving to North America. Riat also added an assist in the victory, giving him his first multi-point game in the AHL.

FUCALE’S FANTASTIC DEBUT: Goaltender Zach Fucale impressed in his Hershey debut, stopping 34 shots, and earning the win between the pipes last Saturday after being re-assigned from Washington’s Taxi Squad. The victory was Fucale’s first in the AHL since Jan. 24, 2019, when as a member of the Chicago Wolves, he stopped 28 shots in a 5-1 win at Cleveland. He also became the first goalie to win his Hershey debut since Adam Carlson in 2017. Fucale’s 34 saves last Saturday were the most stops he’s made in an AHL game since he denied 47 shots in a 3-2 win over Utica with the St. John’s IceCaps on Apr. 9, 2016.

BEARS BITES: The Bears are averaging 36 shots per game, good for 3rd in the AHL…All three of Hershey’s power play goals this season have come versus Wilkes-Barre/Scranton…Dating back to last season, the Bears have beaten the Penguins in six of their last seven meetings.