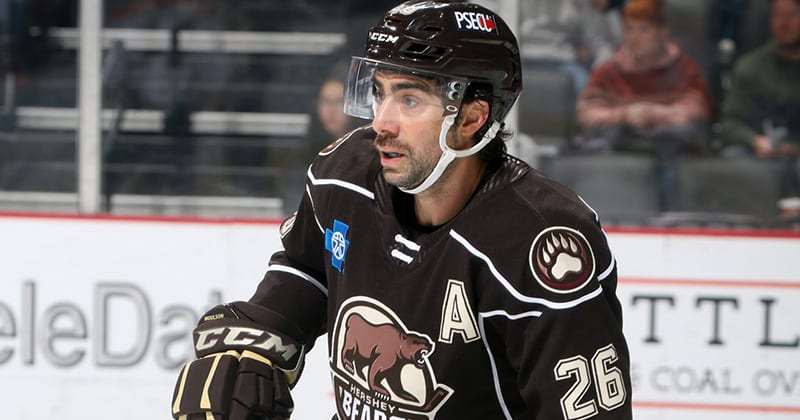 The Hershey Bears announced today that the club has re-signed forward Matt Moulson, agreeing to terms on a one-year, American Hockey League contract.

The North York, Ontario native played in his 1,000th professional game on Jan. 24 at Springfield, scoring twice to lead the Bears to a victory on the milestone night. He was also selected as a playing captain for the 2020 AHL All-Star Classic in Ontario, California, helping lead the Atlantic Division to a championship in the All-Star Challenge.

In his 14 professional seasons, the veteran winger has appeared in 1,017 professional games, with 650 coming in the NHL with Los Angeles, the New York Islanders, Buffalo, and Minnesota. Moulson scored 30 or more goals in three consecutive seasons with the Islanders in 2009-12, and in his NHL career, collected 369 points (173 goals, 193 assists). He was a finalist for the Lady Byng Memorial Trophy in 2013 and served as an alternate captain for the Buffalo Sabres during the 2014-15 season.

The 6-foot-1, 203-pound winger has also appeared in 367 AHL games, scoring 309 points (142 goals, 167 assists) with Manchester, Ontario, and Hershey. Moulson signed an AHL contract with Hershey last July after spending two seasons on loan to the Ontario Reign, where he played for former Bear Mike Stothers and was an alternate captain for the club.

Moulson was selected in the 9th round of the 2003 NHL Draft by Pittsburgh. He played his NCAA hockey at Cornell University, scoring 138 points (71 goals, 67 assists) in 134 games for the Big Red.