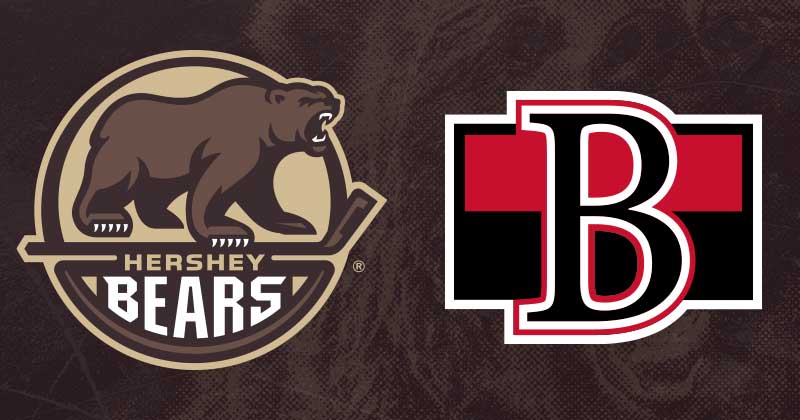 The Hershey Bears continue the 2022-23 season, presented by Penn State Health, as they take on the Belleville Senators for the club's lone visit to CAA Arena this season. Hershey enters tonight's game with points in five straight contests (3-0-2-0).

LAST TIME OUT:
The Hershey Bears opened a four-game road trip with a 3-2 overtime loss to the Laval Rocket last night at Place Bell. Hershey grabbed a 2-0 lead in the first period with two goals late in the frame. Joe Snively scored on a five-on-three power play for Hershey at 17:18 to make it 1-0. With just 5.6 seconds to spare, Mike Sgarbossa doubled Hershey’s lead, scoring on an odd-man rush for his 14th goal of the season. In the second period, Joel Teasdale scored two goals on the power play in less than a minute for the Rocket, striking on a two-man advantage at 12:43, and adding his 9th goal of the season on a redirect at 13:21 to tie the score, 2-2. The Rocket outshot Hershey 23-6 in the middle frame. Neither team scored in the third period, and in overtime, Laval won the contest with its third power play goal of the game as Peter Abbandonato fired a slap shot from the point at 3:53 that Teasdale tipped to complete the hat trick. The Rocket outshot the Bears 42-37 in the contest. The Senators were in action on home ice last night, dropping a 4-3 decision to the Toronto Marlies.  Cole Cassels had two assists in the defeat for Belleville.

THE 700 CLUB:
Tonight marks the 700th professional game for Hershey defender Aaron Ness. The veteran blue liner has appeared in 637 career AHL games with Bridgeport, Hershey, Tucson, and Providence while skating in 72 career NHL games for the New York Islanders, Washington, and Arizona. Ness has 10 points (2g, 8a) in 36 games this season for the Bears, ranking third on the team in scoring among defenders. He was part of the Hershey club coached by current Belleville bench boss Troy Mann that appeared in the 2016 Calder Cup Finals.

SNIVELY'S SCORING:
Hershey forward Joe Snively enters tonight's game with goals in three straight contests. The forward has posted four points (3g, 1a) in his first four games since returning from the NHL’s Washington Capitals. His goal last night was his first power play tally of the season, and he now owns a 27.3% shooting percentage, striking three times this year on 11 shots. The native of Herndon, Virginia has 90 points (38g, 52a) in 123 career AHL games with the Bears and enters tonight’s game two points from 100 in his professional career.

BEARS VS. BELLEVILLE BULLETS:
Tonight marks the first of two head-to-head meetings between Belleville and Hershey this season. Last year the Bears went 1-0-1-0 in a pair of games versus the Senators, earning a 5-4 win at GIANT Center on Feb. 12, and falling at CAA Arena in overtime by a 3-2 score on Mar. 18. Hershey’s Shane Gersich led the way for the Bears in the season series with three assists while Belleville’s Egor Sokolov had a pair of goals. Since Belleville came into the league in 2017-18, Hershey owns a 5-2-1-0 record versus the Senators, including going 3-0-1-0 at CAA Arena. The Senators enter tonight’s game winless in four straight contests (0-3-0-1) while the Bears have points in five straight games (3-0-2-0).

BEARS BITES:
With an assist last night, Hershey forward Ethen Frank has a five-game point streak (3g, 4a). It’s his second point streak of five or more games this season…Last night marked forward Mike Sgarbossa’s 10th multi-point game of the season…Hershey enters tonight’s game with power play goals in five straight contests for the first time this season…A total of 15 of Cole Cassels’ 18 points for Belleville have come at home this season…The Senators have been outscored 53-24 in the first period this season…Senators head coach Troy Mann previously served as the Bears’ assistant coach from 2009-13 and as head coach from 2014-18…Belleville goaltending coach Justin Peters tended net for the Bears between 2014-16, and helped the club reach the Calder Cup Finals in 2016…Forward Shane Gersich’s next point will mark his 100th point in a Bears sweater…Forward Mike Vecchione is two points away from 200 in his professional and AHL career.