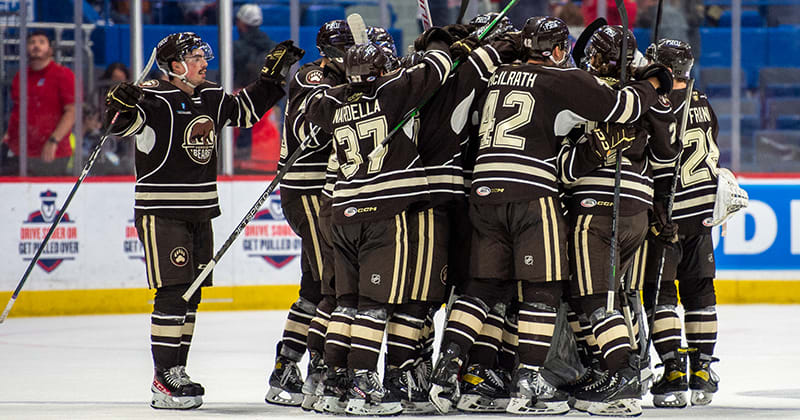 The Hershey Bears (12-4-2-0) completed a perfect sweep of their three-game road trip with a 1-0 shootout victory over the Hartford Wolf Pack (5-7-1-4) on Saturday night at the XL Center.

Goaltending was the story for the first 65 minutes of play, with Zach Fucale and Dylan Garand dueling at opposite ends of the ice for Hershey and Hartford, respectively.

The Bears notably put up 18 shots on Garand in the second period, matching their season-high for shots on goal, but the Wolf Pack netminder turned aside a breakaway opportunity for Jake Massie and was bailed out by the crossbar on an Ethen Frank chance.

Hershey outshot Hartford 10-3 in the third, but neither team managed to find the back of the net. The game was forced to overtime at the end of 60 minutes, where each team managed three shots apiece. The additional five minutes yielded no change in the 0-0 score, giving both Fucale and Garand their first shutouts of the campaign, and sending the Bears to their first shootout of the season.

Hartford elected to shoot first in the penalty shot contest, and both Jonny Brodzinski and Connor McMichael tallied for their respective clubs in the first round, while the goaltenders got the upper hand on Bobby Trivigno and Sam Anas in round two.

Fucale got a piece of Will Cuylle’s shot in the top of the third round, setting up Mike Sgarbossa to clinch the game for Hershey, and the forward delivered with a wrist shot that beat Garand to the blocker side.

Shots finished 39-16 favoring the Bears. Fucale went 16-for-16 for Hershey, while Garand was 38-for-38 in 65 minutes of regulation and overtime. The Bears were 0-for-2 on the power play, while the Wolf Pack were 0-for-1 with the man advantage.

Hershey continues the 2022-23 season, presented by Penn State Health, when the Bears return to GIANT Center for Truly Tuesday, featuring $16 Truly and empanadas at the Truly Cart, against the Wilkes-Barre/Scranton Penguins on Tuesday, Nov. 29 at 7 p.m. Purchase tickets for the game by CLICKING HERE.