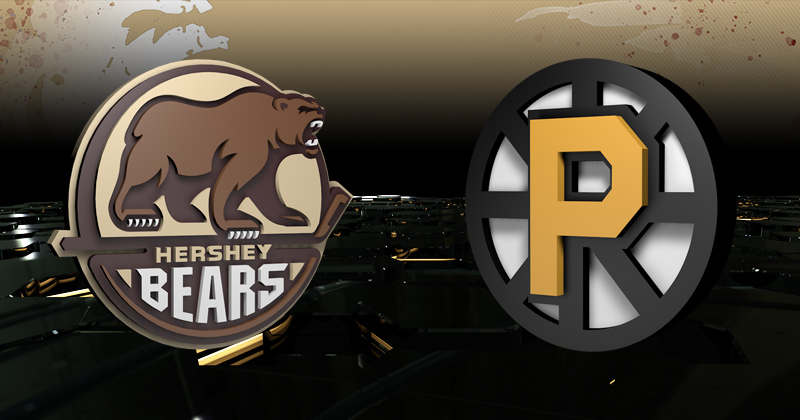 The Hershey Bears continue the 2021-22 season, presented by Penn State Health, as they host the Providence Bruins at 7 p.m. for the club's annual Thanksgiving Eve game. Providence is the AHL affiliate of the Boston Bruins.

LAST TIME OUT:
The Hershey Bears are coming off a 4-2 victory over the Charlotte Checkers last Sunday evening at GIANT Center. Charlotte took a 1-0 lead through 20 minutes, but thanks to goals from Matt Moulson and Mike Sgarbossa, Hershey evened the score, 2-2, through two periods. Joe Snively scored the eventual game-winner on the power play at 2:39 of the third period, and Sgarbossa added his second tally of the night with an empty net goal at 18:22 to give Hershey the win. Providence's previous game was a 3-1 loss to Wilkes-Barre/Scranton last Saturday at the Dunkin' Donuts Center. Jakub Lauko had the lone goal for the P-Bruins, who fired 43 shots at Penguins goalie Louis Domingue.

THANKSGIVING EVE HOCKEY:
Tonight continues the annual tradition of Hershey playing the day before Thanksgiving. Entering tonight, the Hershey Bears have played 65 games all-time on Thanksgiving Eve, winning 32, losing 25, tying five, falling in overtime twice, and losing in a shootout once.  Overall, the Chocolate and White's last win on Thanksgiving Eve was a 4-0 win over Wilkes-Barre/Scranton on Nov. 23, 2016. Vitek Vanecek posted a 24-save shutout that evening.Tonight will be the fifth Thanksgiving Eve battle against the Providence Bruins, with the most recent pre-Turkey Day meeting on Nov. 27, 2019, a 7-6 Providence win via shootout. The Bears first ever Thanksgiving Eve matchup versus a Providence franchise was 53 years ago on Nov. 27, 1968 in a 3-2 loss to the Providence Reds.

BATTLE OF THE BEARS:
This evening's contest is the second of six meetings between the Bears and Bruins this season. Providence claimed a victory earlier this month in the inaugural game of the season series, blanking the Bears 3-0 at GIANT Center on Nov. 6. Goaltender Jon Gillies, since released from his tryout by Providence, stopped all 31 shots Hershey threw his way to earn the shutout. In the previous meeting, Providence forward Steven Fogarty, who was born in Chambersburg, factored in on all three tallies, notching two goals and an assist. In the last five years, Hershey holds a 6-8-2-3 record versus the P-Bruins, going 4-4-1-1 at GIANT Center in that span.

ROSTER SHUFFLE:
The Washington Capitals made a series of roster moves in the last several days, and Hershey has two familiar faces back on the roster, while a pair of skaters have joined the NHL club. After stints up top, forwards Axel Jonsson-Fjallby and Garrett Pilon have rejoined the Bears. Jonsson-Fjallby, who had one assist in eight games with the Capitals, has tallied seven points (3g, 4a) in nine games with Hershey this season, with two of his tallies being game-winners. Pilon, who scored his first NHL goal at Anaheim last week, has registered 11 points (5g, 6a) in 13 games with the Bears this season. However, Hershey is without forwards Beck Malenstyn and Mike Sgarbossa, who each earned NHL call-ups this morning. Sgarbossa is Hershey's leading scorer with 14 points (8g, 6a), while Malenstyn has a goal and two assists this season.