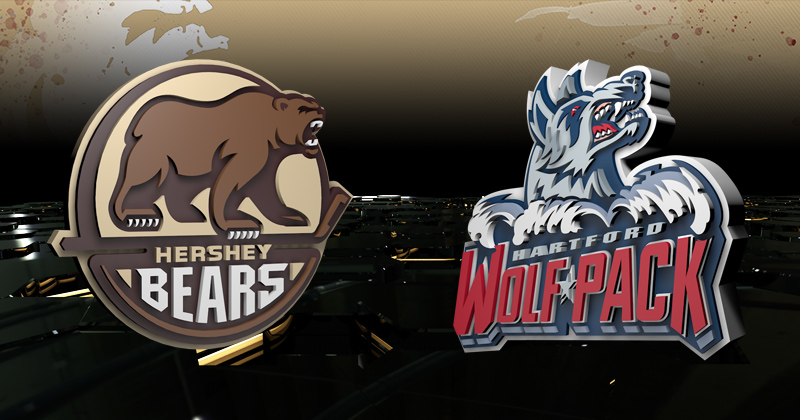 The Hershey Bears continue the 2021-22 season, presented by Penn State Health, against the Hartford Wolf Pack this evening at the XL Center. The Wolf Pack are the affiliate of the National Hockey League's New York Rangers. Tonight marks the start of a six-game season-series between the Bears and Wolf Pack.

LAST TIME OUT:
The Hershey Bears dropped a 5-2 decision last Sunday night at GIANT Center against the Charlotte Checkers. Garrett Pilon started the scoring with a highlight reel goal at 15:39 of the first period, but the Checkers answered with five unanswered strikes including four power play markers against. Riley Sutter earned his first goal of the season for the Chocolate and White late in the final period. Last night, the Providence Bruins edged the Hartford Wolf Pack by a 2-1 margin in overtime. Ty Ronning scored his fifth goal of the season for Hartford to draw even in the third period, but Oskar Steen struck only 26 seconds into sudden-death to hand Providence two points.

DMOWSKI HOMECOMING:
Bears forward Ryan Dmowski returns to Hartford tonight to visit his former club. Dmowski played parts of the last three seasons for the Hartford Wolf Pack and totaled 10 points (5g, 5a) in 46 regular season games. The 24-year-old made his professional debut with the Wolf Pack and recorded an assist on Mar. 23, 2019 against Charlotte. Prior to turning pro, the East Lyme, CT native played four seasons collegiately with UMass-Lowell. Dmowski has appeared in four games with the Chocolate and White this season and scored his first goal as a Bear on Nov. 13 at Syracuse.

SNIVELY SUCCESS:
Forward Joe Snively has points in three of his past four games, registering seven points (5g, 2a) in that span. He has posted a pair of three-point games in that stretch, and the native of Herndon, Virginia is tied for first on the team in goals (5) and power play goals (2), while ranking second in points (10). Snively has 58 points (25g, 33a) in 97 career games with the Chocolate and White. His first career multipoint night (1g, 2a) came against Hartford in the final game of the 2018-19 season on Apr. 14, 2019 at GIANT Center.

MEET THE PACK:
The Hartford Wolf Pack are led by leading point producer Jonny Brodzinski, who has averaged a point in each of his 15 games (4g, 11a). Brodzinski returns to Hartford for his second season after recording 17 points (6g, 11a) in 2020-21. Forward Morgan Barron enters tonight leading Hartford in goals (6), along with a team-best three power play goals. The Halifax, NS native has totaled 30 points (16g, 14a) in 33 AHL games, all with Hartford, dating back to last season. Barron made his NHL debut last season, appearing in five games with the New York Rangers and scoring his first NHL goal on May 5, 2021 versus Washington. Wolf Pack netminder Keith Kinkaid shares the AHL lead in wins (7) with Utica Comets goaltender Nico Daws.

PERFECTING THE PK:
After a strong start to the season, Hershey's penalty kill has hit a bump in the road and will look to get back on track this week. The Chocolate and White have surrendered a power play goal against in four straight games, going just 12-for-20 (60%) on the kill in that span. Despite the recent tough stretch, Hershey's penalty kill has still excelled away from GIANT Center, ranking 8th in the league at 87.5%.

FIGHTING FOR A CURE:
On Sunday, the Bears will host Hockey Fights Cancer Night at 5 p.m. versus the Charlotte Checkers. Joining the efforts of the National Hockey League, Hockey Fights Cancer unites the hockey community in support of cancer patients and their families. When the Bears take the ice Sunday, the club will trade in Chocolate and White jerseys for Hockey Fights Cancer themed jerseys that feature lavender accents. Fans are encouraged to wear lavender on Sunday, and thanks to Penn State Health, all fans will receive a lavender rally towel. Special Bears themed “I Fight For” signs are available to download and print HERE, and a limited quantity will also be available throughout the concourse on Sunday. Fans may share their stories and who they fight for on social media by using the hashtags #HBHIFightFor and #HockeyFightsCancer.