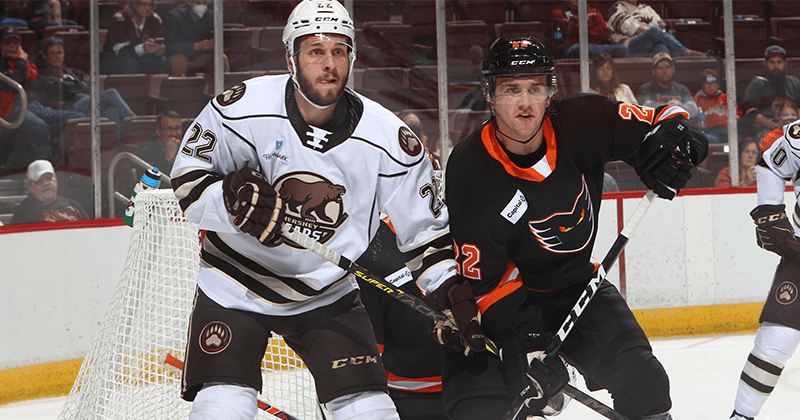 Bears Storm Out of the Gate, Top Phantoms 3-2

The Hershey Bears edged the Lehigh Valley Phantoms by a 3-2 margin on Sunday night at GIANT Center in Hershey's lone preseason game on home ice. Eddie Wittchow scored his third goal of the preseason which later stood as the game-winner midway through the second period. Pheonix Copley stopped 10 of 12 Lehigh Valley shots to secure the victory in net.

Mike Sgarbossa opened Hershey's scoring at 7:11 of the first period on a power play tally. Dylan McIlrath doubled the Bears' lead to 2-0 after converting on the rush at the 11:28 mark. Hershey's 2-0 lead at first intermission was accompanied by a 22-1 shots advantage.

Wittchow converted at 13:02 of the second period for the Chocolate and White's eventual game-winning marker. Wyatte Wylie scored for Lehigh Valley at 18:12 of the middle stanza, and Linus Sandin brought the Phantoms within 3-2 courtesy of a 5-on-3 power play goal at 9:56 of the third period.

Final shots on goal totaled 36-12 Hershey. The Bears finished the night 1-for-6 on the power play and 4-for-5 on the kill.

Hershey concludes their preseason schedule on Wednesday night against the Lehigh Valley Phantoms at the PPL Center. Puck drop is scheduled for 7:05 p.m.