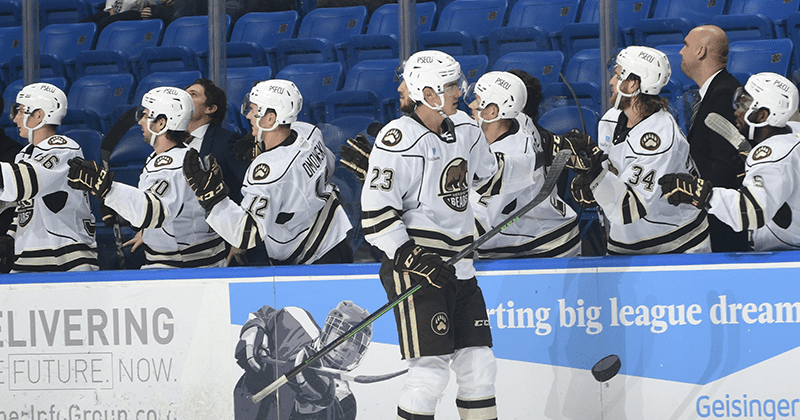 Jan Drozg converted twice for the Pens and opened the scoring at 3:26 of the first period. Wittchow responded with his first of an eventual two goal performance at 12:25. Wilkes-Barre restored their lead at the 17:09 mark courtesy of Matt Alfaro' first goal of the preseason. Shots after 20 minutes were 13-11 Penguins with Wilkes-Bare leading by a 2-1 margin.

Wittchow tied the score once more at 1:15 of the second period on a blast from the center-point. Later in the second frame, Hershey grabbed their first lead on a power play goal scored by Joe Snively from between the circles at 11:02. Shots after 40 minutes were 22-19 Pens with Hershey leading by a 3-2 margin.

Early in the third period, Wilkes-Barre converted twice within 93 seconds to salvage a 4-3 advantage. Drozg tallied a highlight reel goal from the low-slot on Hershey goaltender Ryan Bednard, and Justin Almeida finished a centering pass from Sam Houde at 5:07.
The Bears erased a one-goal deficit for the third time on Friday night courtesy of Brett Leason's power play goal at 9:10. On the rebound of a Matt Moulson shot, Leason found a loose puck sitting in the blue paint for the lay-up.
The 4-4 deadlock stood until nearly the final minute of regulation. Former Penguins blueliner Macoy Erkamps threw a shot near the net, and Ryan Dmowski found the deflection in front for the eventual game-winner with 1:03 remaining.
Final shots on goal totaled 36-34 Wilkes-Barre/Scranton. Hershey's special teams finished 2-for-5 on the power play and a perfect 4-for-4 on the penalty kill. Ryan Bednard earned the victory in net after denying 12 of 14 Baby Pens shots in the final period. Hunter Shepard stopped 20 of 22 Pens bids throughout the first 40 minutes.
The Hershey Bears continue their three-game preseason schedule on Sunday, Oct. 10 at GIANT Center. The Bears will battle the Lehigh Valley Phantoms at 5 p.m. before visiting Allentown on Wednesday, Apr. 13. Tickets for Sunday are all general admission and $15. Visit HersheyBears.com for more information.