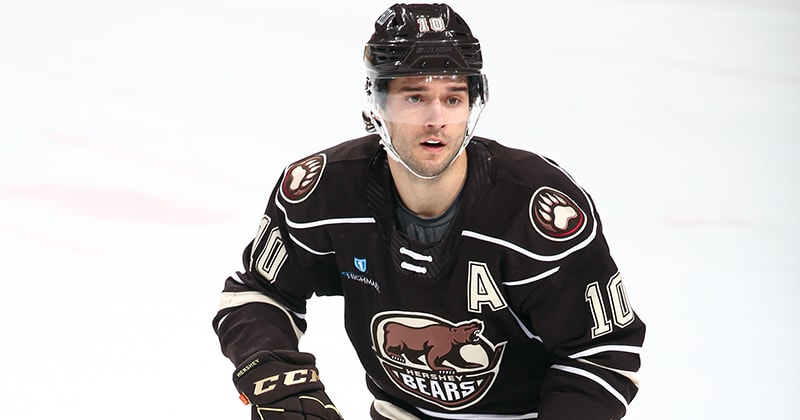 Gersich, 24, recorded 14 points (6g, 8a) in 33 games with the Hershey Bears of the American Hockey League (AHL) last season.

Gersich made his NHL debut on March 28, 2018, against the New York Rangers and appeared in three games in the 2017-18 season, recording an assist. Gersich also played in two playoff games, both in the Eastern Conference semifinal against the Pittsburgh Penguins, en route to the Capitals’ 2018 Stanley Cup.

Gersich recorded 24 points (8g, 16a) in 66 games with the Bears in the 2018-19 season, his first full professional season. Gersich added another three points (1g, 2a) in nine playoff games with the Bears. He led Bears’ rookies in power play goals (2) and ranked second in points per game (0.36) among Hershey rookies with at least 10 games played.

Gersich finished his NCAA career at the University of North Dakota with 77 points (43g, 34a) in 117 games. Gersich was a NCAA All-Star Team Honorable Mention in his sophomore year after leading North Dakota in points (21g, 16a in 40 games), a season that included nine multi-point games. In his 2015-16 freshman season, Gersich’s nine goals ranked third among freshman at North Dakota. Gersich scored the opening goal in the 2016 National Championship, which led to an eventual 5-1 win.

The Capitals selected Gersich in the fifth round, 134th overall, in the 2014 NHL Entry Draft.