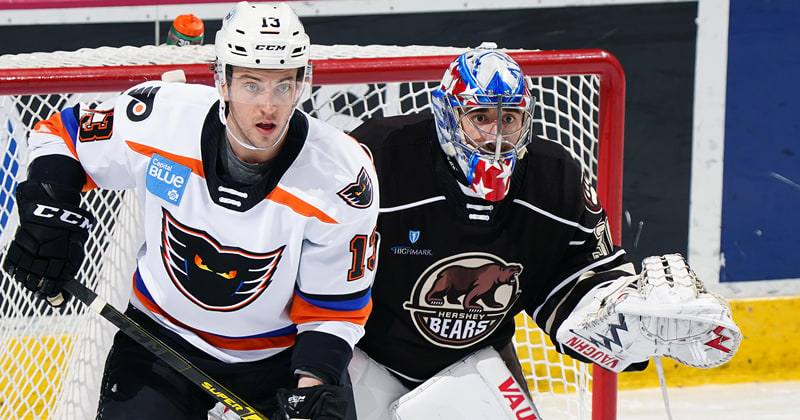 The Hershey Bears won all three games they played last week, improving their record to 20-6-2-0. The Bears hold down the top spot in the North Division with 42 points and a .750 points percentage with five scheduled games left in the season. While the AHL officially announced there will be no playoffs this season, the Bears are striving to claim the North Division regular season title, and overall, they are the second best team in the AHL, only trailing the 22-5-1-1 Laval Rocket. This week, the Bears visit Lehigh Valley on Wednesday, travel to Newark to battle Binghamton on Friday, then host the Phantoms Saturday.

Last Wednesday, Hershey scored a 4-3 shootout win over the Binghamton Devils on the road. Matt Moulson registered two goals and an assist in the victory, and Philippe Maillet and Axel Jonsson-Fjallby scored in the shootout. Goaltender Zach Fucale stopped 29 shots in regulation, and denied both shots he faced in the shootout to earn the win. Hershey is 9-1-0-0 versus the Devils.

On Saturday, Hershey earned a hard-fought 4-3 overtime victory at Wilkes-Barre/Scranton. The Penguins led 1-0, 2-1, and 3-2, but Hershey battled back every time, getting goals from Cameron Schilling, Alex Alexeyev, and Kale Kessy. In overtime, Connor McMichael struck for the winning marker on a breakaway at 1:41 to give Hershey the win. The goal was McMichael’s second overtime winning tally this season.

The Bears finished last week with a 2-0 win over the Lehigh Valley Phantoms at GIANT Center on Sunday. Netminder Hunter Shepard earned the clean sheet in his first AHL start for Hershey, and the Bears got goals from Brett Leason and Axel Jonsson-Fjallby in the win. The victory was Hershey’s seventh straight win on home ice, and moved the club to 11-1-2-0 at GIANT Center.

CHASING THE OKE: The American Hockey League announced last week the Calder Cup would not be awarded this season and that the North Division will not hold playoffs. Despite this, the Bears are still playing for a trophy. The league announced that the winner of the North Division will be awarded the F.G. (Teddy) Oke Trophy as division champions. The winner will be decided on points percentage, and Hershey currently holds the division’s best points percentage at .750 with Lehigh Valley second at .673.

SHEPARD SHUTS DOOR: It was quite the AHL debut for Hershey goaltender Hunter Shepard last Sunday. The 25-year-old posted a 28-save shutout in his first game in the league, blanking the Lehigh Valley Phantoms, 2-0. The two-time National Champion at Minnesota-Duluth was no stranger to shutouts at the NCAA level, as he posted 17 in his tenure with the Bulldogs.

100 FOR CARBS: With Hershey’s win on Sunday, head coach Spencer Carbery earned his 100th victory with the Bears. He is the 12th head coach in franchise history to hit the milestone. Carbery holds an exceptional 100-49-9-8 record since taking over as Hershey’s bench boss in June of 2018.

MILESTONES AHEAD: Goaltender Pheonix Copley enters this week with 99 career victories in the AHL. He looks to become the first goaltender to earn his 100th victory in a Hershey sweater since both Dan Ellis and Justin Peters accomplished this in the 2015-16 season. Additionally, forward Philippe Maillet is just two assists from 100 in his AHL career, while captain Matt Moulson needs three points to reach 700 points in his professional career.

ROOKIE RECORDS: Rookie forward Connor McMichael scored his sixth game-winning goal of the season in Wilkes-Barre/Scranton last Saturday. He leads the AHL in game-winning goals, and he’s the first Hershey rookie since Andre Faust in 1992-93 to tally the deciding marker six times. McMichael is currently tied for the team lead in points and is attempting to become the first Hershey rookie to lead the team in scoring since Craig Fisher collected 79 points during the 1990-91 season.

BEARS BITES:  Defender Cameron Schilling ranks ninth in the league in scoring from the blue line with 17 points, while Martin Fehervary is 10th with 16 points. Fehervary’s three shorthanded points are also the most among AHL defenders and he currently has assists in four straight games…Hershey is now the only team in the AHL to not allow a shorthanded goal…Hershey (Copley, Fucale, Shepard) and Henderson (Dansk, Ferguson, Thompson) are the only teams in the AHL to have three different goaltenders each record a shutout.