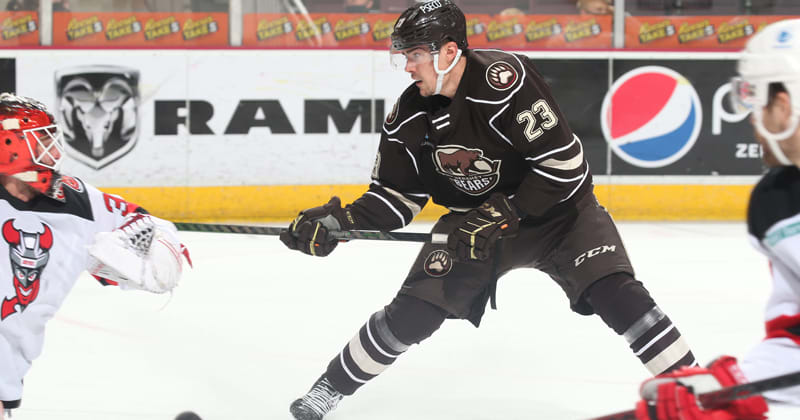 The Hershey Bears scored three times in the final five minutes of the second period to pull away from the Binghamton Devils on Saturday afternoon, 6-3, at GIANT Center. Brian Pinho had two goals for the Chocolate and White, and the Bears improved to 15-5-2-0 on the season. The Bears have won four straight games, and the club has also won its past five games on home ice. Hershey is now 8-1-0-0 versus the Devils this season.

The teams traded goals in the opening stanza. Binghamton's Nate Schnarr struck first at 2:12, capitalizing in tight off a turnover from Hershey defender Rob O'Gara to make it 1-0 Devils. However, Hershey tied the game on a pretty passing play as former WHL teammates Aliaksei Protas and Brett Leason connected. Leason finished a give-and-go with Protas, scoring his 5th goal of the season at 9:57 to tie the game, 1-1. All five of Leason's goals this season have been versus the Devils.

Binghamton grabbed a 2-1 lead just 38 seconds into the second period as Danick Martel banged a shot past Hershey netminder Pheonix Copley at the back post to put the Devils in front. The goal was Martel's 6th of the season, and came on Binghamton's fourth try at the net.

It took until the 15:20 mark of the middle stanza, but Hershey was able to turn on their offensive game and never look back. Shane Gersich tied the score with his 5th goal of the season with a one-timer from the right circle. Defender Alex Alexeyev, who was playing his first game of the season with the Bears, circled the net and found an open Gersich on a backhand feed for the tying goal.

At 18:41, Hershey took its first lead of the game on a slapshot goal from Pinho. As defender Reece Willcox drove the net, Pinho let a shot go that ramped up the stick of Binghamton defender Connor Carrick's stick and into the net for Pinho's 6th goal of the year.

Less than a minute later, the Bears struck again. Martin Fehervary scored his 3rd goal of the season on a shot from the right corner that leaked through Binghamton goaltender Gilles Senn to make it 4-2 Bears at 19:24.

Hershey's Cameron Schilling added a 5-on-3 power play goal, assisted by Philippe Maillet and Pinho at 4:43 of the third period to put Hershey comfortably in front, 5-2.

The Bears outshot the Devils 47-26 in the win. Copley made 23 saves for Hershey to earn his 5th straight victory.

Hershey is back in action Wednesday evening at Lehigh Valley at 7:05 p.m. The game may be heard on the Bears Radio Network and viewed on AHLTV.