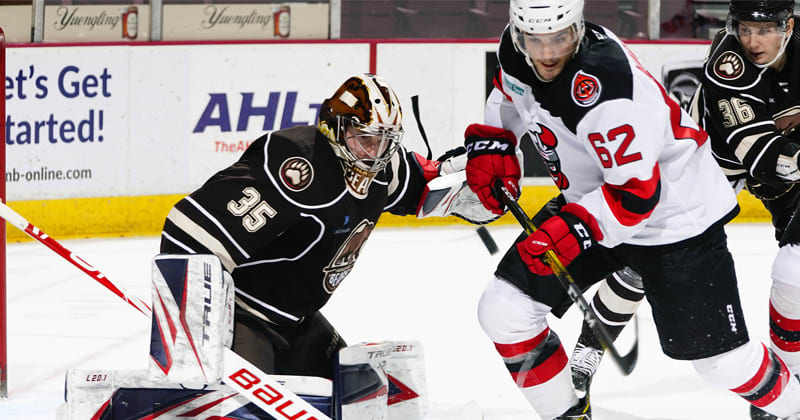 Zach Fucale stopped all 22 shots he faced, helping the Hershey Bears blank the Binghamton Devils, 3-0,  in front of 403 fans on Saturday evening at GIANT Center. Fucale has now stopped 56-of-57 shots this season and his First Star performance Saturday helped the Bears earn a weekend sweep of a home-and-home with the Devils, and improved the club's record to 5-1-2-0.

Fucale was sharp all game long, stopping numerous point blank opportunities and displaying an impressive glove hand . The netminder was at his best in the third period, turning aside 12 Binghamton shots to preserve the whitewash. For Fucale, it was his third career American Hockey League shutout, and his first since Apr. 8, 2017 when as a member of the St. John's IceCaps, he turned aside 24 shots to blank the Binghamton Senators, 5-0, on the road.

Hershey got a goal in each period in the victory. Second-year forward Joe Snively got the scoring started, jamming a loose puck past Binghamton goaltender Evan Cormier at 5:15 of the opening stanza to make it 1-0 Hershey. Garrett Pilon added a helper, extending his point streak to four games, and Mason Morelli also assisted, giving him helpers on back-to-back nights.

In the second period, Hershey's power play broke through courtesy of a deflection from captain Matt Moulson. Connor McMichael's one-timer from the right wing was tipped under Cormier by Moulson from the crease to make it 2-0. For Moulson, it was his first power play goal of the season after he led the Chocolate and White with 11 markers on the man-advantage last year.

In the third period, Pilon setup Sgarbossa with a perfect feed from behind the net, and the Hershey veteran sniper beat Cormier past the blocker for his 4th goal of the season at 5:03.

Hershey went 1-for-2 on the power play in the win, and the Devils went 0-for-3. Binghamton out shot the Bears by a narrow 22-21 margin. Hershey is now 3-0-0-0 against the Devils this season. The two teams play nine more times.

The Chocolate and White are back in action on Wednesday evening as they battle the Lehigh Valley Phantoms at 7:05 p.m. at the PPL Center in Allentown. The game may be heard on the Bears Radio Network and viewed on AHLTV.