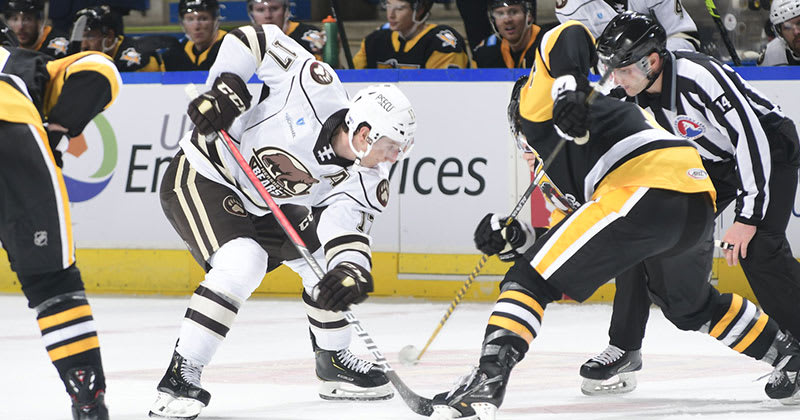 Will Graber scored his first American Hockey League goal, but the Hershey Bears fell in regulation for the first time this season, suffering a 4-2 defeat to the Wilkes-Barre/Scranton Penguins on Wednesday night at the Mohegan Sun Arena. The loss dropped the Bears to 3-1-2-0.

Hershey scored the icebreaker in the first period on Graber's tally. The rookie defender walked in off the left point, cutting around an attacking Wilkes-Barre/Scranton defender. He fired a shot to the net that Penguins goaltender Max Lagace stopped, but Graber was able to pop the rebound through a cluster of players and past Legace to make it 1-0. Paul LaDue and Garrett Pilon assisted on the goal.

The Penguins responded before the period ended on Radim Zohorna's first AHL goal. The forward charged the net, and a poke from Hershey's LaDue sent the puck up in the air and over Bears goaltender Ilya Samsonov to tie the game at 19:48.

In the second period, the teams traded goals, with Wilkes-Barre/Scranton pulling ahead, 3-2. Anthony Angello gave the Penguins the lead at 7:37, sliding a rebound past Samsonov, but Mike Sgarbossa responded for Hershey just over two minutes later. Sgarbossa inadvertently blocked a Reece Willcox shot, and the puck landed at his feet. With Lagace out of position, Sgarbossa scored his third goal of the season to make it 2-2.

Less than a minute later, Zohorna gave the Penguins the lead back, powering his way to the net, sliding a shot past Samsonov's right pad for his second goal of the contest at 10:39. The tally stood up as the winner, and Nick Schilkey added an insurance marker at 3:58 of the third period to give the Penguins the win.

The Bears are back in action on Friday versus Binghamton in Newark, New Jersey. The puck drops at 7 p.m. and the game may be heard on the Bears Radio Network and viewed on AHLTV.