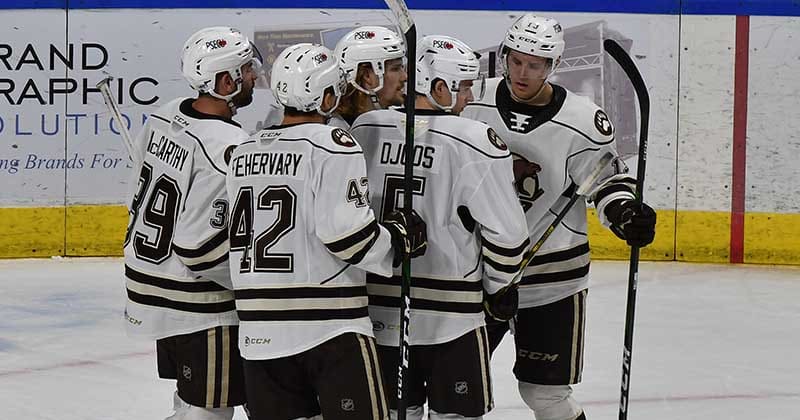 The Hershey Bears were denied a power play goal for the first time since Feb. 1, and dropped a slim, 2-1 decision to the Wilkes-Barre/Scranton Penguins on Friday night at Mohegan Sun Arena. Hershey's power play finished the night 0-for-4, including three missed opportunities in the second period, followed by a 6-on-4 opportunity late in the final period.

For the seventh consecutive game, the Chocolate and White scored first to grab a 1-0 lead. Phoenix Copley and Casey DeSmith each stopped a breakaway chance early in the stanza, but Axel Jonsson-Fjallby broke through on an offensive zone rush late in the frame. On a quick breakout play, Beck Malenstyn stretched a headman pass to Jonsson-Fjallby along the right wing, who fired a twisted wrister past DeSmith and into the cage at 17:13. Shots after 20 minutes were 11-10 Penguins.

The Bears fanned on three power play chances in the second period, and Wilkes-Barre/Scranton countered with a late period strike of their own. With the Penguins hemmed in their own zone, a Brian Pinho shot from the left point was knocked down by David Warsofsky, and he sprung Kevin Roy for a breakaway. In all alone against Copley, Roy registered his 10th goal of the season to even the score at the 19:39 mark. Shots after 40 minutes were 18-15 Bears with the score tied at 1-1.

Next period, the Pens scored the frame's only goal at 3:48 to grab their first lead of the night. Riley Barber carried the puck into Wilkes-Barre/Scranton's attacking zone, and Myles Powell bumped a drop pass to Kevin Czuczman at the center point. Czuczman unleashed a dart into the cage under the crossbar for his second goal of the season. DeSmith was sensational in net for the Pens, denying all 18 Hershey shots in the third period. Final shots on goal finished 36-19 Hershey. The Bears record moves to 32-17-3-3.

The Hershey Bears return to action and conclude their brief, two-game weekend set tomorrow night on the road. The Bears will battle the Bridgeport Sound Tigers for the sixth and final time in 2019-20. Puck drop from Webster Bank Arena is slated for 7 PM. Voice of the Bears Zack Fisch will have the call on the Bears Radio Network.