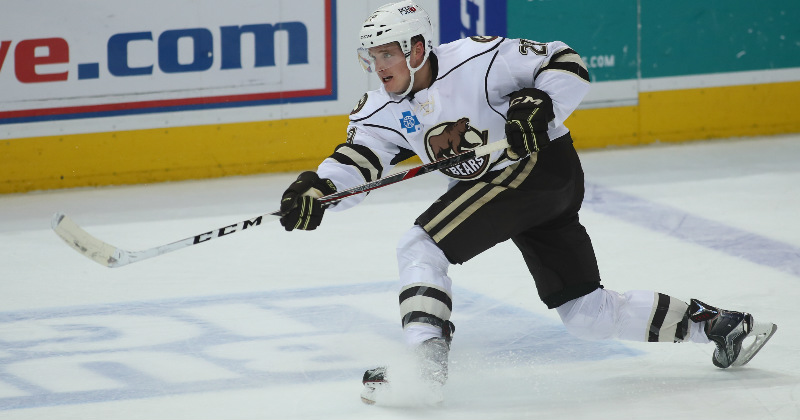 The Hershey Bears announced today the recall of defenseman Tommy Hughes from the club's ECHL affiliate, the South Carolina Stingrays.

Hughes, 27, is no stranger to the Bears. He inked an AHL deal with the Bears in 2017, appearing in 10 games with the Chocolate and White in 2017-18, registering two penalty minutes. He signed a one-year, AHL contract with Hershey this past summer. The 6-foot-2, 225-pound blue liner spent the first four seasons of his professional career in the AHL with the Hartford Wolf Pack from 2013-17. Hughes has appeared in 236 AHL games, registering 30 points (five goals, 25 assists) and 145 penalty minutes. He has also appeared in 15 career Calder Cup Playoff games, scoring three points (one goal, two assists).

With the Stingrays this season, Hughes has eight points (two goals, six assists) in 33 games, posting a +13 rating.

The former London Knight will join Hershey today and is expected to wear #29.

The Bears return to action this evening at the Giant Center versus the Springfield Thunderbirds at 7 p.m. It's Capital BlueCross Baseball Cap Night for the first 5,000 fans. Tickets may be purchased at the Giant Center Box Office, and additional ticket information is available at HersheyBears.com.