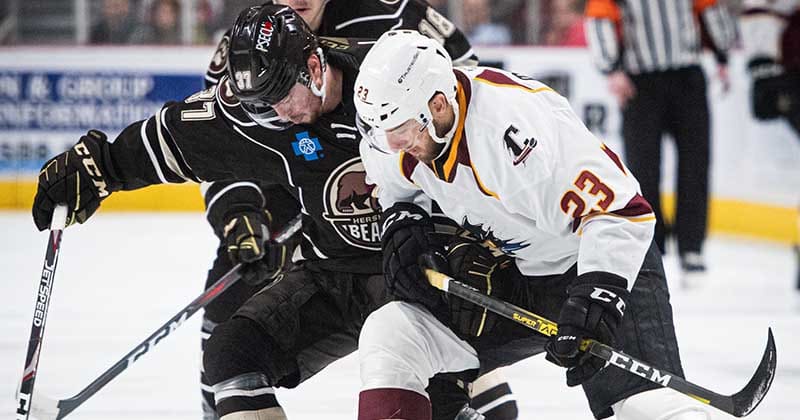 Beck Malenstyn scored late in the 3rd period, and Axel Jonsson-Fjallby tallied twice to help the Hershey Bears double the Cleveland Monsters, 4-2, on Saturday night at Giant Center. Tied at 2-2 with 3:20 remaining, Malenstyn followed the rebound of a Brett Leason shot into the cage for the eventual game-winner.

Before Hershey's late game heroics, Jonsson-Fjallby opened scoring for the Chocolate and White for the second consecutive night. At 6:11, Jonsson-Fjallby potted his ninth goal of the season after burying a power play goal following a perfect, cross-ice pass from Chris McCarthy. The Bears led after 20 minutes, 1-0, with shots even at 9-9.

Late in the second period, Cleveland solved Pheonix Copley, but Hershey responded before the frame expired. At 16:21, Adam Clendening blasted a shot through traffic and into the cage for the equalizer. Only 1:37 later, the Bears converted on the power play for the second time. Bobby Nardella received a pass from Martin Fehervary, and blasted a slapper past Monsters goaltender Veini Vehvilainen. Shots after 40 minutes were 18-17 Hershey.

In the final period, Kole Sherwood evened the score once more for Cleveland upon further video review. On a collision play at the net, Sherwood was credited his fifth goal of the season despite the net being pumped off by Copley during the play. Malenstyn answered with his go-ahead, game-winning goal at 16:40, and Jonsson-Fjallby hit the vacant net at 19:43 to round out a 4-2 final.

Final shots finished 31-26 Hershey. The Bears power play finished 2-for-6, and penalty kill completed a 3-for-3 performance. It marked the first time the Chocolate and White tallied multiple power play goals in a single game since Oct. 13 versus Wilkes-Barre/Scranton, snapping a 35 game stretch. Hershey's record in the victory reaches a season-best, 12 games over .500 at 23-11-2-3.

The Hershey Bears return to action and kickoff back-to-back meetings in Charlotte on Tuesday, Jan. 14 against the Checkers. Puck drop is scheduled for 7 PM at Bojangles' Coliseum. Voice of the Bears Zack Fisch will have the call on the Bears Radio Network.