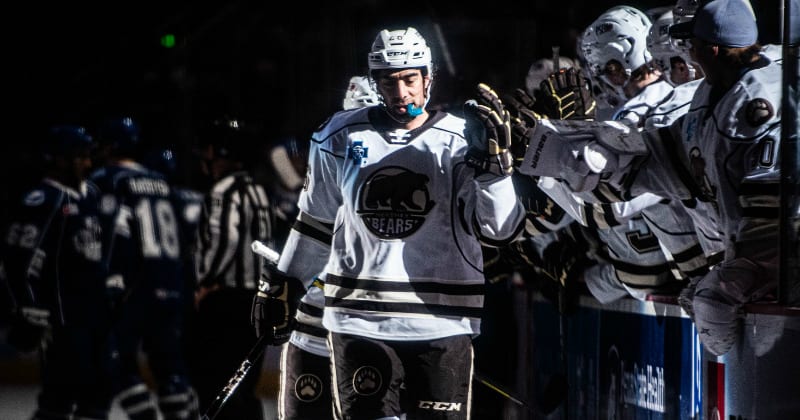 Weekly Release #5: After Two Wins, Another Three in Three Ahead

The Hershey Bears opened the month of November by earning a pair of victories on home ice last weekend, improving the team’s record to 6-4-1-1 through the first 12 games of the 2019-20 campaign. The Chocolate and White’s success leads them into a week where they’ll once again play three games in three nights, visiting Atlantic Division leader Hartford on Friday, playing at Lehigh Valley on Saturday, and finishing the weekend by hosting the Phantoms at Giant Center on Sunday evening.

Hershey opened last week with an 8-1 loss at Springfield. Axel Jonsson-Fjallby scored the lone goal for the Bears. The loss marked the first time Hershey surrendered eight goals in a game since Oct. 20, 2012, an 8-7 loss to Rochester.

The Bears bounced back Saturday night at Giant Center with a 5-3 win over divisional rival Providence. Erik Burgdoerfer, Shane Gersich, and Garrett Pilon all scored their first goals of the season in the victory while the Bears penalty kill scored a shorthanded goal and went a perfect 6-for-6 on the evening.

Hershey finished the week with a 4-2 victory over Syracuse at Giant Center. Matt Moulson added a pair of first period goals, while Beck Malenstyn and Mike Sgarbossa also scored. The win ended Syracuse’s 17-game point streak in the month of November that dated back to the 2017-18 season.

#HersheyBearsCares Events This Week
The Bears are committed to giving back to the local community. On Wednesday, two players will participate in a Naval Support Activity from 2-3:30 p.m., two players will hand out tickets to members of the USO from 2-4 p.m., and two players will appear at the Hershey Community Gardens from 3-4 p.m.

THE NARD DOG: Rookie defender Bobby Nardella made his first mark on the scoresheet this weekend. The Notre Dame product posted his first two professional points, collecting a pair of assists in Hershey’s victory over Providence on Saturday. He followed up that performance by adding another assist in Sunday’s victory over Syracuse. Nardella, who was signed as a free agent by the Washington Capitals on Apr. 5, was named Hershey’s PSECU Player of the Week.

300 FOR MATTY MO: Veteran forward Matt Moulson tallied his 300th professional goal in last Sunday’s victory versus Syracuse. His second marker of the evening that night gave him 124 career AHL goals in 317 games. He scored 176 goals during his 650 games in the NHL, including potting 30 or more goals in three straight seasons with the Islanders from 2009-12.

AXEL ON THE ROAD: Hershey forward Axel Jonsson-Fjallby has been a force on the road for the Chocolate and White. The Swede winger enters this week with goals in five straight road games, collecting six points (five goals, one assist) in that span. Jonsson-Fjallby’s five goals this season tie him for second in the league among rookie scorers. He boasts a 29.4% shooting percentage through the first 12 games this season.

POWERED BY THE PENALTY KILL: The Bears went a perfect 9-for-9 on the penalty kill in a pair of victories at Giant Center last weekend. The club has been superb while a man down in Hershey, going 20-for-21 on the penalty kill, ranking fourth in the league on home ice at 95.2%

WOLF DOWN: The Bears head into Friday’s showing with division leading Hartford with a set of streaks versus the Wolf Pack. Hershey has won six straight games overall versus Hartford, sweeping the six-game season series last year. Additionally, the Bears have won six straight games at the XL Center. Hershey’s last loss versus the Wolf Pack in Connecticut came on Mar. 31, 2017.

BEARS BITES: The Bears enter the week ranking first in the AHL in shots against, allowing just 25.58 per game...Hershey is on a five-game point streak at Giant Center, going 3-0-1-1 in that stretch on home ice…Hershey’s next nine games come versus Atlantic Division opponents…Former Bears defender and current Washington Capital John Carlson was selected as the Ephesus/AHL Graduate of the Month for October, scoring 23 points in 14 games.