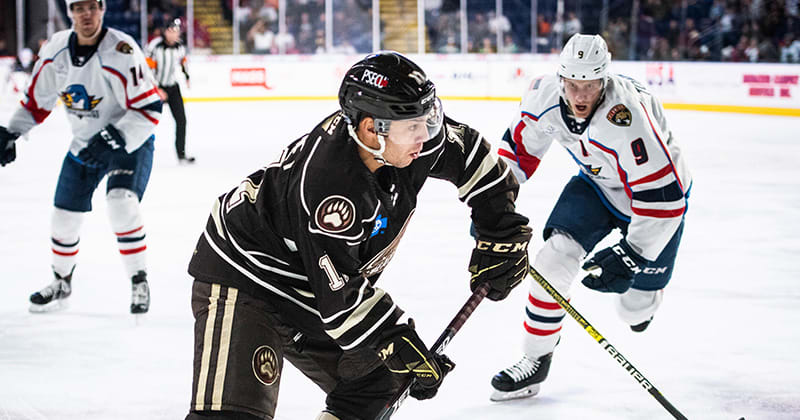 Axel Jonsson-Fjallby scored for the Chocolate and White, but the Hershey Bears dropped an 8-1 decision to the Springfield Thunderbirds on Friday night at the MassMutual Center. It marked the first time the Bears allowed eight goals since Oct. 20, 2012 against the Rochester Americans. The loss moved Hershey's record to 4-4-1-1 following the first 10 games of the 2019-20 season.

Hershey entered Friday allowing the game's first goal in five straight contests. Springfield opened the scoring at 3:38 to extend such streak to six games, and eighth time in Hershey's first 10 games. On a 3-on-2 counter attack, Paul Thompson scored his first of two goals after burying a cross-ice feed past Pheonix Copley along the near post.

At 15:00, Hershey drew even with Jonsson-Fjallby's team-best, fifth goal of the season. After Colby Williams gained the offensive zone, Jonsson-Fjallby received a drop pass and released a wicked wrister past T-Birds goaltender Chris Driedger. Shots after 20 minutes were 8-7 Hershey with the score deadlocked at 1-1.

Into the second period, Springfield rattled off three goals on three consecutive shots to take a sudden, commanding 4-1 lead. First at 3:52, Henrik Borgstrom scored after the Bears were hemmed in their defensive zone for a minute. Next at 4:36, Aleksi Saarela tallied his first goal of the season on an odd-man rush. At 7:07, Dominic Toninato joined the score sheet after a neutral zone turnover led to a quick transition opportunity for Springfield. Before the period expired, Thompson earned his second goal of the night at 17:47 to extend his team's lead to 5-1.

The Thunderbirds added three more goals in the third period to complete an 8-1 onslaught. Anthony Greco scored his first of two goals in the stanza at 1:09 on a shorthanded breakaway. Using his speed, Greco turned a 2-on-1 rush into a breakaway, and he beat Copley for his fifth goal of the season, and first shorthanded goal allowed by Hershey in 2019-20. Greco added his second goal of the night at 14:14, before Owen Tippett finished the scoring at 15:26.

Final shots on goal were 27-22 Springfield. Hershey finished the night 0-for-2 on the power play and 2-for-2 on the penalty kill.

The Hershey Bears return to action on Saturday, Nov. 2 for a 7 PM meeting against the Providence Bruins. It's College Night at Giant Center. College students can purchase 100 Level tickets for $22.00 and 200 Level tickets for $16.50. Game ticket also includes a hat that can be picked up the night of the game. When purchasing in person simply present valid College ID at the Giant Center Box Office.