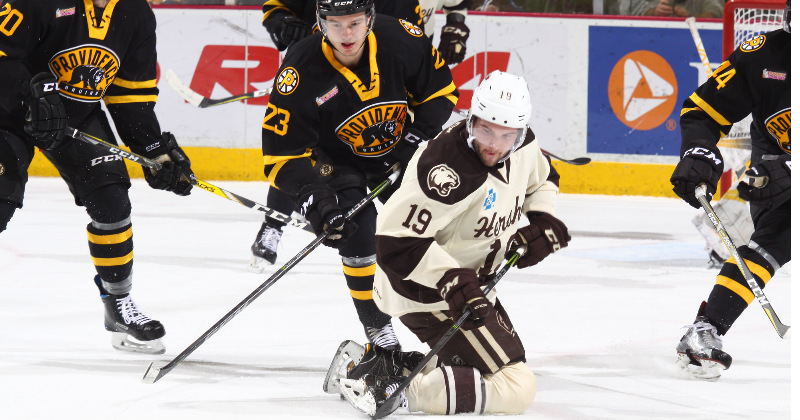 Zane McIntyre stopped all 28 shots the Hershey Bears threw his way to lead the Providence Bruins to a 3-0 victory on Wednesday night at the Giant Center. The win was the eighth straight for Providence.

The Bruins scored the only goal they needed at 14:54 of the opening period on the power play. Colton Hargrove connected on a great passing play for his eighth goal of the season to make it 1-0 for the visitors. Jordan Szwarz fed a pass from the goal line to Hargrove in the shot. The winger snapped a shot past Hershey goaltender Vitek Vanecek to give the visitors the lead.

The Bears led the shots on goal category 23-12 after two periods, however it was Providence who would find the back of the net next. Anton Blidh scored on a two-on-one, one-timing a Hargrove pass into the right side of the net to give Providence a 2-0 lead.

Providence would add to the lead at 14:35 as Zach Senyshyn skated around Hershey's defense and knocked his own rebound past Vanecek to extend the Bruins' lead to an insurmountable 3-0 advantage.

Wednesday's game marked the first time Hershey was held scoreless at Giant Center since Bridgeport goaltender Chris Gibson kicked out all 28 shots he faced in a 5-0 shutout victory for the Sound Tigers on Nov. 14, 2015.

The two teams will rematch on Saturday night at the Giant Center at 7 p.m. That evening is Hershey's annual Hall of Fame Night and ticket information is available at HersheyBears.com.