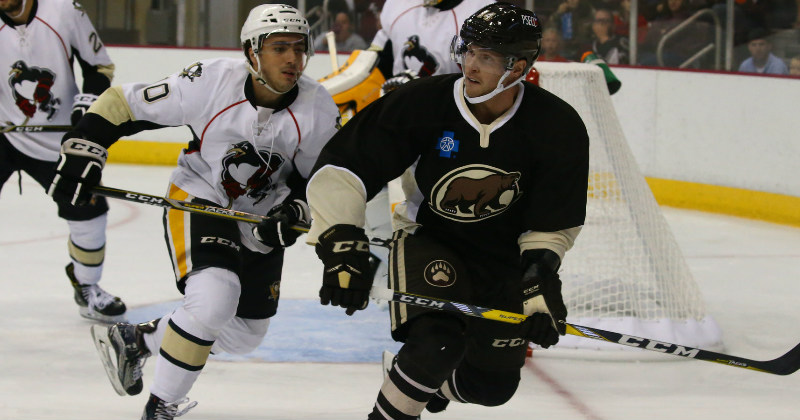 Despite a late rally to force overtime, the Hershey Bears fell 3-2 in the extra session to the Wilkes-Barre/Scranton Penguins in the preseason finale on Saturday night at Giant Center. Even with Hershey's perfect 11-for-11 night on the penalty kill, and a game-tying goal with just 1:38 to play, it was Wilkes-Barre/Scranton earning the win, as Frank Corrado who was the hero, scoring 2:29 into overtime.

The Penguins opened the scoring 7:52 into Saturday’s contest on a goal by Jean-Sebastien Dea. Wilkes-Barre/Scranton took advantage of a delayed penalty, scoring with the extra attacker to make it 1-0. Dea tallied his first goal of the preseason, snapping a wrist shot over the catching glove of Hershey netminder Parker Milner from the left wing. Ryan Haggerty and Adam Johnson assisted on the icebreaker.

In the middle period, the two teams traded goals. Wilkes-Barre/Scranton doubled its lead only 1:25 into the frame. Off a faceoff win by Jarrett Burton, the puck went straight to the Penguins Reid Gardiner. His one-timer found the top corner over the glove of Milner to give Wilkes-Barre/Scranton a 2-0 advantage.

The Bears would elate the Giant Center crowd of 4,323 at 14:30 on Dustin Gazley’s third goal of the preseason. With a delayed penalty and an extra attacker on the ice, perfect passing resulted in a highlight reel tally. Chris Bourque retrieved the puck on the right wing and fed teammate John Albert along the goal line. He made a backhand pass to Gazley who stood wide-open on the left wing. Gazley made no mistake, striking to cut the Wilkes-Barre/Scranton lead to 2-1.

After several successful penalty kills to start the third period, Hershey used a power play of its own to tie the game with under two minutes to play in regulation. The Bears pulled the netminder and struck 6-on-4 as Chris Bourque scored on a one-time slap shot from the right wing to make it 2-2 at 18:22. Connor Hobbs and Lucas Johansen assisted on the equalizer.

In overtime, the two teams traded chances, but a sudden change of possession was the deciding factor. Hershey appeared to be breaking up ice on an odd-man rush, when Wilkes-Barre/Scranton stripped the puck, setting up a 2-on-0 for the Penguins. Wilkes-Barre's Dea fed a pass across to Corrado, and the defender scored the winning goal for the Penguins from the right wing.

Wilkes-Barre/Scranton’s Casey DeSmith earned the win in goal, stopping 21 shots. Adam Carlson took the loss for Hershey despite a strong 20-save effort in relief. The Bears were 1-for-5 on the power play on Saturday. Wilkes-Barre/Scranton outshot Hershey 37-23 on the evening.

Hershey finishes the preseason at 1-0-1-0. The club opens the regular season next Saturday, Oct. 7 at the PPL Center versus the rival Lehigh Valley Phantoms. The puck drops at 7:05 p.m. and the game may be heard on the Bears Radio Network as Zack Fisch has the call from Allentown.

The Hershey Bears 2017-18 season is almost here! The puck drops on the historic 80th anniversary season with the home opener on Saturday, Oct. 14 versus Belleville. Information on the 2018 Capital BlueCross Outdoor Classic, full season tickets, 22-game and 12-game plans and flex-10 ticket plans for the 2017-2018 season is available now by calling (717) 508-BEAR or by visiting HersheyBears.com.  Flexible ticket plans start as low as $195 per seat.